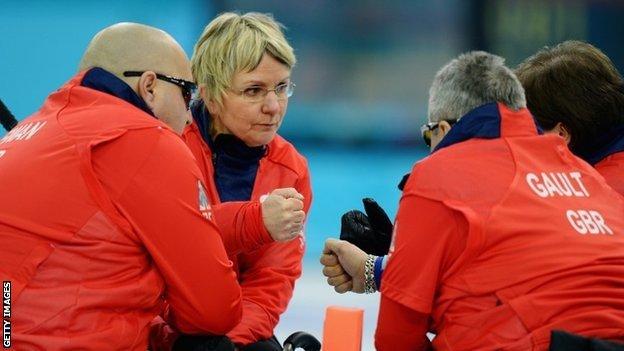 Great Britain have reached the semi-finals of the wheelchair curling competition at the Sochi Paralympics, despite losing 6-3 to China in their last round-robin game.

Hosts Russia came from behind to end Slovakia's hopes of progressing by beating them 7-4.

The Russian win was enough to put GB through after their 8-7 extra-end win against USA earlier on Thursday.

GB will now face Russia in Saturday's semi-final at 05:30 GMT.

"I didn't realise the score in the Russia v Slovakia and it was only when our coach Tony Zummack came down at the end of the fourth end and changed things that I realised what was happening," GB player Gregor Ewan told BBC Sport.

"I wasn't watching the score and it was only at the end of the seventh end when the Russian fans started cheering so loudly, you couldn't help but look and see what was going on and we saw the scoreboard and then realised we were through to the semi-finals."

It was an anxious time for GB who failed to get into gear against China and skip Aileen Neilson was replaced by Bob McPherson after four of the eight ends after McPherson had lost his place in the team to alternate Angie Malone in the opening game.

But Russia did them a big favour, leaving it late before scoring five in the final two ends to beat Slovakia.

GB themselves had fought back against the USA after trailing 6-2 with two regulation ends to go but raised their game to score five in the penultimate end and go ahead for the first time.

The USA tied up the match to force an extra end but GB got another score in the deciding end to win.

"We are absolutely delighted to be in the last four," Neilson added. "That was our target at the start of the competition and luckily results went the way they had to.

"We now just have to rest and be completely positive and focussed on our two games on Saturday."

On the slopes, Britain's James Whitley (16) was 15th in the men's standing slalom on his Paralympic debut.

Whitley, from East Sussex, was 20th after the first run but moved up the standings with a combined time of one minute 53.43 seconds, just over 14 seconds behind gold medallist Alexey Bugaev of Russia.

Ben Sneesby finished 11th in the men's seated slalom. The 19-year-old recorded a combined time of two minutes 05.30 seconds for his two runs.

However, Mick Brennan who was disqualified for missing a gate on his first run.

In the sledge hockey, Russia and the United States will meet in the final after they both recorded 4-0 semi-final victories. Russia defeated Norway while the US beat Canada.