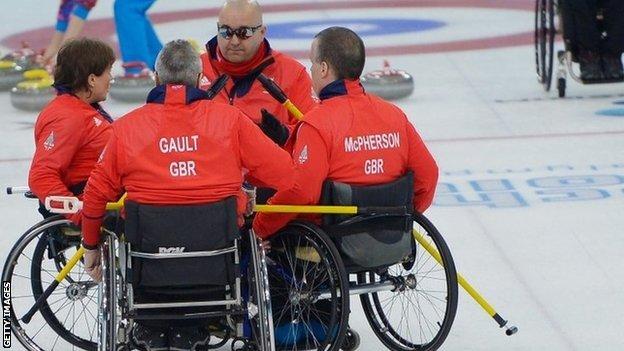 GB take on Russia at 05:30 GMT with defending champions Canada taking on China in the other semi-final.

But despite losing to all three rivals in the round-robin phase, Zummack is confident of GB's medal chances.

"They were three of our worst games of the week so we know we have plenty of room to improve," he told BBC Sport.

"I would be more concerned if we had put in stronger performances in those three games and still lost."

But their place in the last four was only secured after Russia defeated Slovakia in the final pool game as GB lost out to China.

They now have a chance to follow the Olympic men's and women's curlers who won silver and bronze medals at the Ice Cube Curling Centre last month and look at improving on the silver medal won by the GB team at the 2006 Paralympics in Turin.

"We have done what we wanted to do and reached the semi-finals, but the play-offs are a new competition for us," added Zummack, who took over as coach of the all-Scottish team in 2011.

"We haven't been as consistent as we would have liked so far."

GB got off to a slow start in their round-robin game against Russia and never recovered from going 4-0 down after three ends and GB player Gregor Ewan knows his side will also have to deal with the vociferous home support.

"It must be a great feeling to be Russian hearing that crowd. Even for us, the roar is immense," he told BBC Radio 5 live.

"We have to put a couple of scores on the board early on, put them on the back foot and force them to play harder shots."

Zummack has proved during the competition that he is not afraid to make difficult decisions, taking skip Aileen Neilson off halfway through the games against Finland and Russia and giving alternate Angie Malone time in both matches.

But he insists that all of the decisions are made with the team as the priority.

"If you have a player who is struggling and a spell on the sidelines can help refresh them, then by taking them off you are doing what is best for the team." he explains.

"Some people on the outside look at it as a punishment but the team are comfortable with it and it is all done with them in mind."