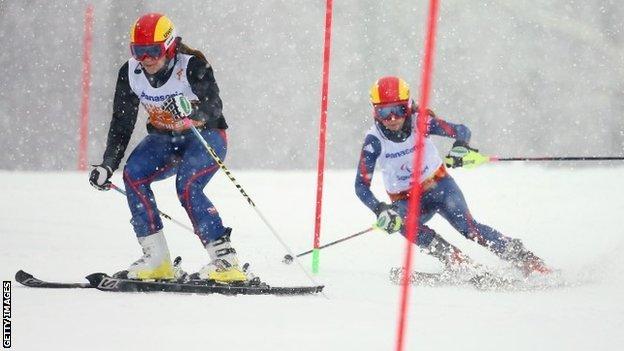 Visually-impaired skier Jade Etherington and guide Caroline Powell have become the most successful British women in Winter Paralympic history after a fourth medal in Sochi.

The pair clinched a silver in the super combined on Friday.

She closed the gap in the super-G race, but still finished 0.63 seconds back.

Etherington and Powell pushed hard to try and get the better of their Russian rivals and put in a superb performance down the Rosa Khutor slope.

But Frantceva's advantage from the slalom meant she could afford to make a couple of mistakes and still emerge victorious with her guide, Pavel Zabotin.

"It was a really tough run but we really went for it over the jumps and carried a really good line throughout the different parts of the course and made up a couple of seconds," Etherington told BBC Sport.

"It was a good solid performance. It's just a bit annoying that it was so close again to Frantceva."

Etheringon added that she was delighted she had finished every race she had entered so far.

"It's only me and Frantceva who have done that so I'm really proud of that," she said. "It hurt my legs putting everything into it because we didn't want to settle for silver."

Powell added: "It was probably the best run we've ever done in super-G and I think we had everything bang on, apart from one gate, but that always happens somewhere.

"Jade coped really well with the terrain and it was a good run. Three seconds is a lot to make up. I never expected us to be that close at the end."

Etherington and Powell had earlier won silvers in the downhill and slalom, plus a bronze in the super-G.

Now they have overtaken Denise Smith, who won three silvers for Britain in ice sledge speed racing in Innsbruck in 1984.

"We came here just wanting to concentrate on our performance," Etherington added. "But I told my sisters before I left that I would try really hard to win them a medal. Now we have won four.

"It's crazy to think that we have done that. I knew we could do it but to have success you have to believe you can do it."

Their final chance of a medal will be in Sunday's giant slalom. GB rivals Kelly Gallagher and Charlotte Evans and Millie Knight and Rachael Ferrier will also take part.

Meanwhile, Anna Turney crashed out of the women's sit-ski event but was able to recover and ski down to the end of the course.

Only two skiers finished both runs in the event and Germany's Anna Schaffelhuber claimed her fourth gold medal of the competition while Marie Bochet of France won her third gold in the standing division.