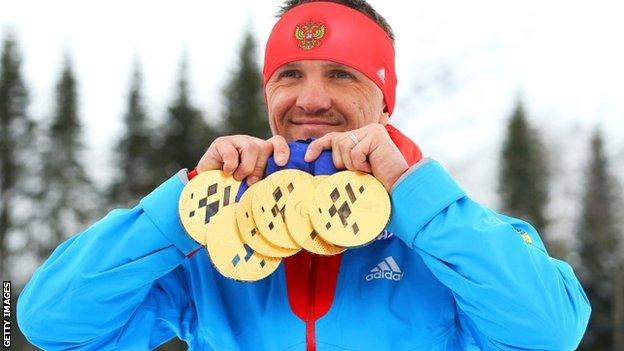 As the Winter Paralympics draws to a close, Sochi can be proud of a spectacular competition with record-breaking performances, superb displays of athletic ability and constant pushing of boundaries.

It has been a Games with unprecedented ticket sales and media interest and showed the Paralympic movement is not resting on its laurels after the massive success of London 2012.

On the ice and snow, new British and international heroes have emerged with history being made.

BBC Sport looks at some of the key moments and faces of the Games.

While Russia put in a strong performance as Games host, it was at the Laura Cross Country and Biathlon Centre where they proved to be almost completely dominant.

Of the record-breaking 80 medals won by Russia at the Games, 62 were won across both sports. 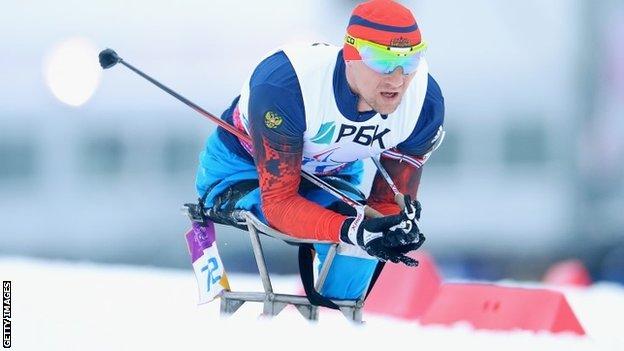 And chief among their heroes was Roman Petushkov who won a record six gold medals - the most ever by any individual at a single Winter Paralympics.

The 36-year-old, who lost both his legs in a car accident in 2006, came to sport shortly afterwards and showed a real talent for both cross country and biathlon.

He made his Paralympic debut in Vancouver, winning cross country silver and biathlon bronze in the seated division, but after winning five world titles in Sweden last year, the pressure was on him in Sochi.

But he was superb in winning the 7.5km, 12km and 15km biathlon as well as the cross country 1km, 15km and the 4x2.5km relay, and earned praise from Russian president Vladimir Putin.

The only blip came in his final event, the 10km cross-country, where he finished fourth. 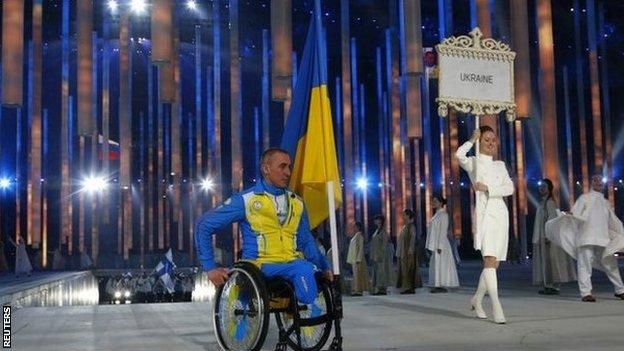 Ukraine's participation in the Winter Paralympics was in doubt in the build-up amid fears they would boycott the Games following Russia's actions in Crimea.

The move by the Russians had led to Prince Edward, patron of the British Paralympic Association cancelling a visit to Sochi on government advice.

But on the morning of the opening ceremony, at an emotional news conference, the country's Paralympic Committee president Valeriy Suskevich confirmed they would take part in the Games.

However, that was not the end of the matter.

At the opening ceremony, Ukraine was represented by just one athlete, flagbearer Mykhaylo Tkachenko, with the rest of the team opting not to join him in the athletes parade.

Tkachenko received a warm welcome from the crowd at the Fisht Stadium, which included president Putin, but the Ukraine team had made their point. 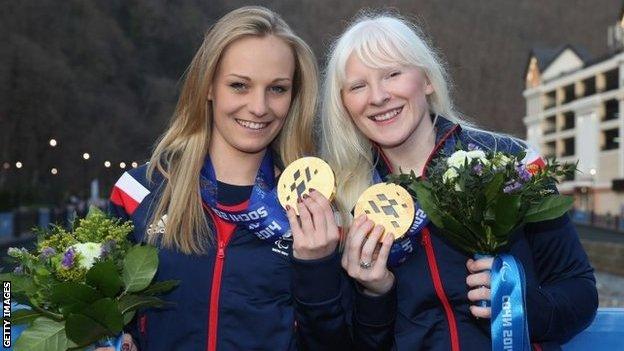 Britain's Olympians and Paralympians have spent many years trying to win a gold medal on snow.

But all that changed on Monday 10 March when Northern Ireland's Kelly Gallagher and her guide Charlotte Evans put in a storming run to win gold in the super-G on the Rosa Khutor slopes for ParalympicsGB's first-ever gold medal and that illusive debut gold on snow.

Gallagher and Evans, who started working together in late 2010, had gone through a lot to get to that point, including crashing falls, rows, counselling, the death of Gallagher's father and finishing sixth and last in their opening race - the downhill.

But they showed great powers of recovery to put in the run of their lives and finish 0.22 seconds ahead of Russian Aleksandra Frantceva.

While team-mate Jade Etherington went on to become Britain's most successful Winter Paralympian with her four medals, and the rest of Gallagher and Evans's race programme did not go to plan with three DNFs, their place in history is assured. 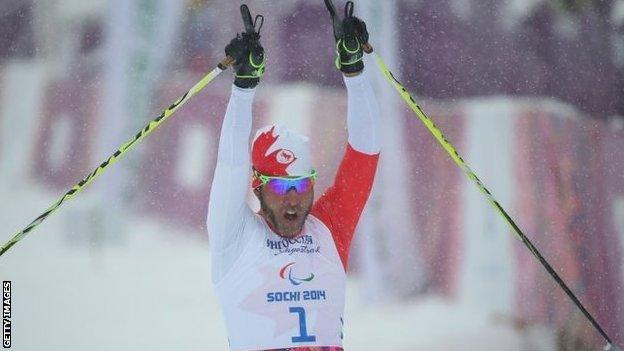 Just 200m after the start of the men's visually impaired 1km sprint McKeever tripped and fell, seemingly putting his title hopes at an end.

But the 34-year-old got quickly to his feet and with the help of guide Graham Nishikawa, who was racing in his first international race, started to chase down his rivals - no easy task over such a short course.

However McKeever was majestic, first moving into medal contention before eventually overhauling Swedish leader Zebastian Modin to triumph by 1.4 seconds.

"There was the instant F-bombs, but once we got up, we realised we were still in the race," said McKeever after the victory.

McKeever went on to win a 10th gold in the mens' 10km race to become the first Canadian to win 10 Winter Paralympic golds, and he is not ruling out trying to add to his tally in Pyeongchang in 2018. 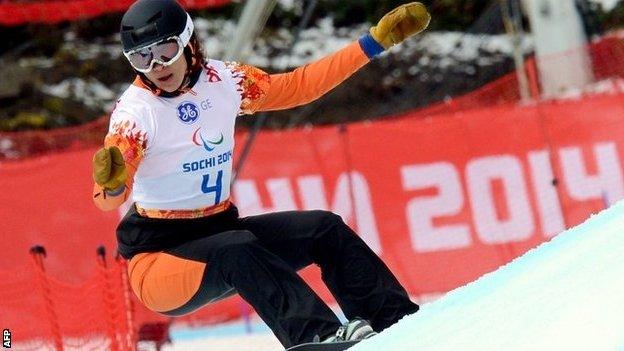 Riders, all with lower limb impairments, made their way down the course which featured a series of jumps and rollers.

And it was Dutch woman Bibian Mentel-Spee and American Evan Strong who created history as the first gold medallists in the event.

The gold medal was particularly special for Mentel-Spee, who had her Olympic dream ended when she contracted cancer and had to have her lower leg amputated.

But she was among those who led the charge for the sport to be included in the Games and was rewarded for her efforts with gold in front of her family, including young son Julian.

"It took us about eight years to get [snowboard] into the Paralympics," she explained.

"My journey to get it there was never about winning a gold medal, it was to showcase our sport and to show the kids out there with a physical disability that a sport like snowboarding really can be done as well." 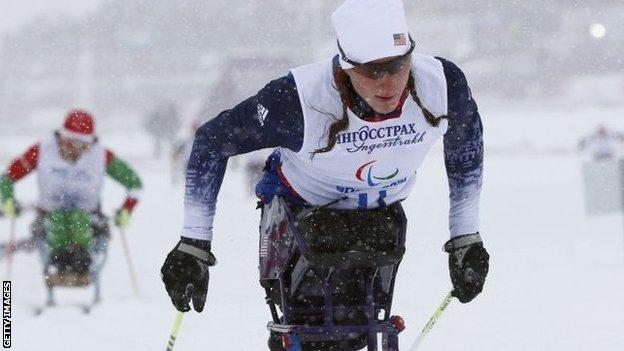 American Tatyana McFadden came to the Sochi Paralympics as the leading figure in wheelchair racing having won five gold medals at last year's IPC World Championships in Lyon and a clean sweep in the main city marathons, as well as 10 Summer Paralympic medals.

But after just over a year of cross country ski training, she came within a whisker of gold in the 1km sprint event before being beaten on the line by Norway's Mariann Marthinsen by 0.1 seconds.

The Games were a homecoming for McFadden, who was born in Russia but was adopted from a St Petersburg orphanage by American Debbie McFadden when she was five and now lives in Illinois.

However she was watched in Sochi not just by Debbie but also her birth mother Nina Polevikova and members of the Russian side of her family and they were immensely proud of her efforts as she showed grit, determination and incredible sporting ability.

"The most important part is just having my family here," said McFadden. "It's definitely a fulfilling moment." 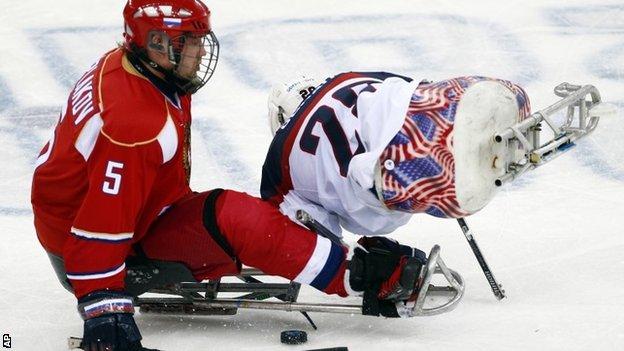 From war hero to Paralympic hero

Russia, who were making their debut in the event, showed the rapid progress they have made in a very short space of time by beating the defending champions USA in their pool game.

The sides met again on Saturday in the gold medal game in front of a packed crowd at the Shayba Arena and a captive television audience with NBC showing it live on their main channel, the first time ever a Paralympic sporting event was broadcast live on the channel.

It was vice captain Josh Sweeney who was the match winner with the only goal of the game in the second period of a tense encounter with US goalkeeper Steve Cash having to pull off a string of saves.

Sweeney came to the sport after he stepped on an improvised explosive device in Afghanistan in 2009 as a member of the US Marine Corps, losing both of his legs.

"I think it's awesome in the fact that we're almost getting a second chance to represent our country," he said.

"Being injured, I never thought I'd be able to do something like this again or be able to represent my country again. Having a second chance just means a lot to me."