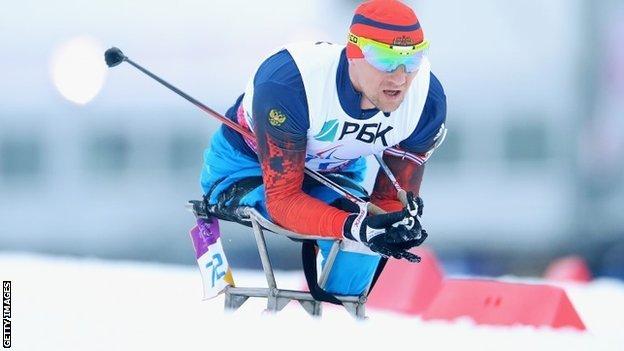 The 36-year-old nordic skier and biathlete helped Russia to victory in the 4x2.5km open relay, beating Ukraine by 55.1 seconds.

It is the most gold medals won by an individual at a single Games.

Petushkov, who lost his legs in a car accident in 2006 and competes in the seated division, won a silver and a bronze in Vancouver.

But he has proved unstoppable in Sochi, winning golds in the cross country 1km sprint and 15km as well as the 7.5km, 12.5km and 15km biathlon events before his cross country team success.

Petushkov has the chance to go for a seventh gold on Sunday when he competes in the 10km cross country, an event where he is the world champion.

But Russia were unable to add to their gold medal tally in Saturday's sledge hockey final after the USA won 1-0 at a packed Shayba Arena.

Josh Sweeney got the only goal of the match in the second period and goalkeeper Steve Cash pulled off a string of saves as the USA defended the title they won four years ago in Vancouver and gained revenge for a defeat to the Russians in the pool stages in Sochi.

It was a still a superb display by the hosts who were making their Paralympic debut in the sport.