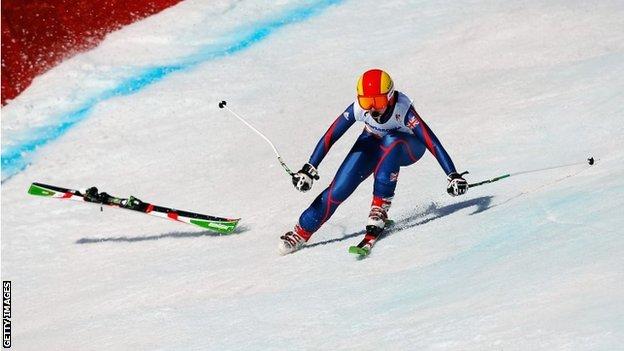 Britain's Kelly Gallagher and Jade Etherington missed out on medals in the visually impaired giant slalom on the final day of the Sochi Winter Paralympics.

Four-time medallist Etherington was ruled out through illness.

Fifteen-year-old Knight, the GB flagbearer at the opening ceremony, finished a total of 18.71 seconds behind gold medallist Henrieta Farkasova of Slovakia.

"I'm really pleased as it was so much fun and I enjoyed every minute," she told BBC Sport. "Giant slalom is my favourite. We thought we would be last but we have done much better.

"Getting back to normality will be a bit of a shock to the system."

Anna Turney finished eighth in the seated race after an improved second run as Germany's Anna Schaffelhuber completed a clean sweep in the division with her fifth gold out of five.

Gallagher and Evans were chasing Farkasova's time when Gallagher lost a ski and tumbled to the ground.

"I don't know how to pick myself up at the moment. It feels so difficult to see how things could go so wrong," Gallagher told BBC Sport.

"Charlotte and I trained for four years to win gold medals. We put a lot of pressure on ourselves and that's why the crashes all feel so hurtful.

"I think when we get home we will understand the enormity of winning a gold medal but at the moment it feels like we put in a lot of hard work for a lot less than we had expected from ourselves."

Etherington, who became Britain's most successful Winter Paralympian with three silvers and a bronze, tweeted: "Gutted we can't race the GS today! Thank you to @CarolineSkier and @ParalympicsGB for looking after me."

GB chef de mission Penny Briscoe said: "Jade has had an exceptional Paralympic Games and her performances for ParalympicsGB have been outstanding. Her withdrawal from the final event in no way diminishes her fantastic achievements here in Sochi."

Etherington will carry the British flag at Sunday evening's closing ceremony at 16:00 GMT.