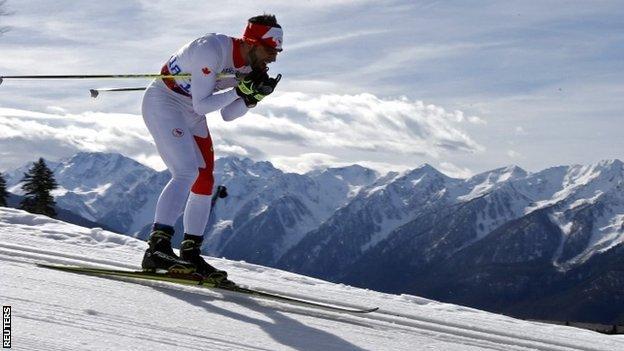 The 34-year-old defended his 10km title to add to his success in the 1km and 20km events.

The nordic skier and biathlete had been the star of the Russian team and set a new Games record after winning his sixth gold in Saturday's mixed relay - the most won by an individual at a single Games.

But McKeever put in a strong second half of the race to beat Russian Stanislas Chokhlaev by seven seconds and become the first Canadian to win 10 Winter Paralympic golds.

McKeever trailed his rival by 8.7 seconds after 7.5km of the race but Chokhlaev struggled on the last circuit as McKeever, who was guided by team-mates Erik Carleton and Graham Nishikawa, pushed on strongly for another gold medal.

And McKeever told BBC Sport afterwards that he was proud of the efforts of that the trio put in.

"The story is bigger than us - we are just three guys trying to make our way through these competitions," he said.

"We have a job to do and that's what we tried to do and we have done our best and I am really proud we were able to do it as a team.

"Erik and Graham were great guys and were phenomenal guides.

"That was four hard years of work and we have done it as a team."

American Tatyana McFadden missed out on a second medal after she finished seventh in the women's 5km seated race which was won by Germany's Andrea Eskau, who claimed her second gold of the week.