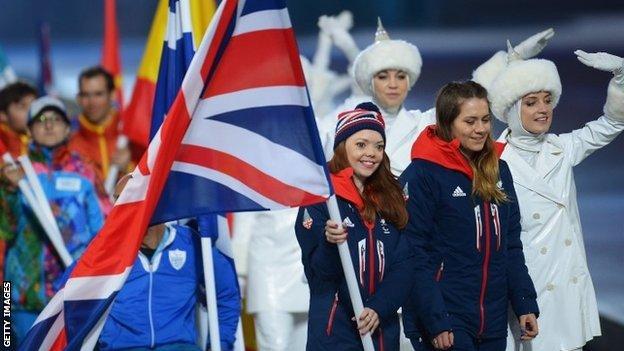 The curtain has come down on the 2014 Winter Paralympics in a colourful and spectacular ceremony in Sochi.

The Games were being held in Russia for the first time and were a huge success.

The hosts topped the medal table with 80, including 30 golds - the most medals ever won by a nation at a Winter Games.

Great Britain enjoyed their most successful Games since Innsbruck in 1984 with six medals - one gold, three silvers and two bronzes.

The GB team finished 10th in the medal table above the likes of Norway and Sweden.

Visually impaired skier Jade Etherington, who won three silvers and a bronze along with her guide Caroline Powell to become the greatest British Winter Paralympian of all-time, carried the British flag.

Etherington (23) missed her final race of the competition, Sunday's giant slalom, because of illness but recovered for the ceremony.

The Ukraine flagbearer, biathlete and cross-country skier Lyudmila Pavlenko entered the stadium wearing a top emblazoned with the word 'Peace'.

The closing ceremony theme of 'Reaching the Impossible' celebrated the achievements of the 547 athletes from 45 countries who competed for the 72 medals on offer.

"Proud Paralympians - your inspirational athletic performances have redefined the boundaries of possibility," he told the crowd.

"You have shown the world that absolutely anything is possible and that life is about amazing capabilities and not perceived deficiencies."

The Paralympic flag was lowered and presented to Pyeonchang in South Korea, hosts of the 2018 Winter Games.

Dutch snowboarder Bibian Mentel-Spee and Australian skier Toby Kane were given the prestigious Whang Youn Dai award for exemplifying the spirit of the Paralympic Games.

Mentel-Spee was instrumental in getting her sport into the Games for the first time in Sochi and became the sport's first ever female Paralympic champion.

Kane, who won won bronze in the standing division super-combined in Sochi, helped lead the Australia team during a difficult build-up to the Games, which included the death of snowboarder Matthew Robinson last month.