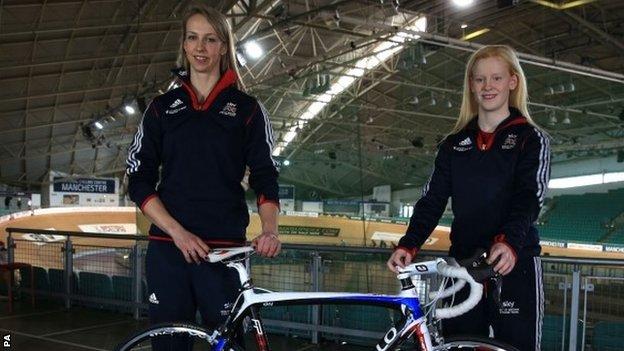 Britain's new tandem cycling pairing of Sophie Thornhill and pilot Rachel James hope they can mark their major international debut with a medal.

The pair only started riding together late last year.

But they have been included in an 11-strong GB team for the Para-cycling Track World Championships which start in Aguascalientes, Mexico on Thursday.

"We want to show the rest of the world what we can do," Thornhill, 18, told BBC Sport.

Thornhill and James, the sister of world track cycling champion Becky James, will compete in the kilo and tandem sprint events in Mexico after teaming up together in September.

The World Championships were only confirmed late last year and are the first chance for riders to earn qualification points for the Rio Paralympics on a track at high altitude. Records tumbled when it hosted a round of the UCI World Cup last year.

At last December's Paracycling International Cup in Newport, Thornhill and James won their kilo event, finishing just 0.73 seconds outside the world record. With a solid block of training since then are ready to hopefully make a big impact on the international stage.

"To know there is a major competition for us to compete in and train towards after such a wait has been a big relief and allowed us to put our focus into something solid," said Thornhill.

The teenager from Poynton in Cheshire is one of the BBC's Ones to Watch in 2014 and has a form of albinism, which affects the pigment in her eyes and skin. She rides on the back of the tandem with James as the sighted pilot.

"Our partnership is coming together nicely," she added. "We've had to learn a lot but our times are going well and we work well together.

"Rio is the big goal for us and this is a great chance for us to put down a good marker, especially against the Paralympic champion Felicity Johnson, who is riding with a new pilot.

"I'm sure we will be nervous but you can't let that take over. You have to do what you do day in and day out and focus."

Also included on the GB team is 11-time Paralympic champion Dame Sarah Storey, who is back after giving birth to baby Louisa last June, while Jody Cundy is hoping to recover from his false start and controversial outburst at the London Paralympics.

Head coach Jon Norfolk knows that with a little over two years to go to the Rio Games, these World Championships come at an important time for his squad.

"This event is key, both in terms of getting early points on the board for Rio and making sure we have enough places on the team, and also to put down a strong marker and see where the rest of the world is at this point," he said.

"In terms of medal haul I'm confident our riders will be in contention in all of their events. A lot of nations will turn up with new faces so I won't expect us to win everything.

"There are some strong nations like America, Brazil and Australia so it will be interesting to see what everyone else brings to the competition."