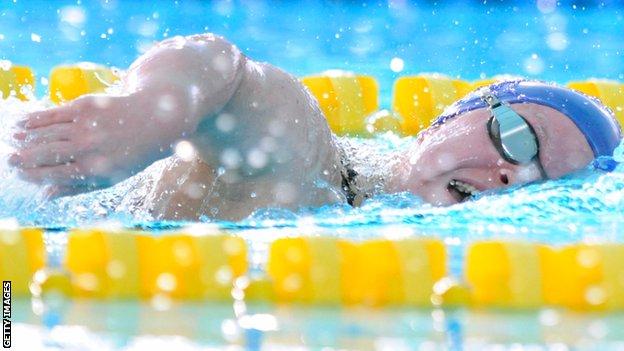 Ellie Simmonds, Stephanie Slater and Amy Marren were among those gaining IPC European Championships qualification times on the opening day of the British Para-Swimming meet in Glasgow.

The event at Tollcross Swimming Centre is the trials for the championships in Eindhoven, Netherlands, in August.

"Getting the qualifying time was my aim coming here," she told BBC Sport.

"I felt good coming into the meeting and I swam faster than I expected."

Simmonds, who moved training base from Swansea to Loughborough last year, added: "I always find it hard at multi-disability events because I tend to be in the outside lanes and it is more difficult to race there.

"But it has been good to change my training set-up. It is nice to swim with different people and their enthusiasm is helping me."

"It was great to get the qualifying time out of the way so early to take the pressure off," said the 15-year-old, who is competing in seven events at the four-day meeting.

"I could have asked for quicker in the final but it was another qualifying time so I'm not complaining."

As well as beating the qualifying standard for her S8 category, Slater won silver in the multi-classification event behind American 12-time Paralympic champion Jessica Long, who swims in the same class.

It continues Preston swimmer Slater's good form after she achieved a qualifying standard for the Commonwealth Games at the same venue last week.

"The 100m free isn't my main event and I didn't expect to get on the podium - so to do that and get the European qualifying time as well, I am really happy," said the 23-year-old.

"It is great to have Jess here and it gives me an opportunity to race one of my big rivals and gives me that extra drive to swim even faster."

In the 100m breaststroke, London SB6 silver medallist Charlotte Henshaw squeezed under the 1:41.96 standard with a time of 1:41.43.

"That is a massive relief," she said. "My heat swim wasn't great so tonight was about getting the job done."

There was a British record of 1:18.91 for S14 swimmer Nicole Lough, breaking the 1:20.03 she set in Sheffield in January, and her time was enough to qualify her for the Europeans.

Gold went to Bethany Firth, who competed for Ireland but switched nationalities to Britain. She is not eligible to compete at the European Championships, however.