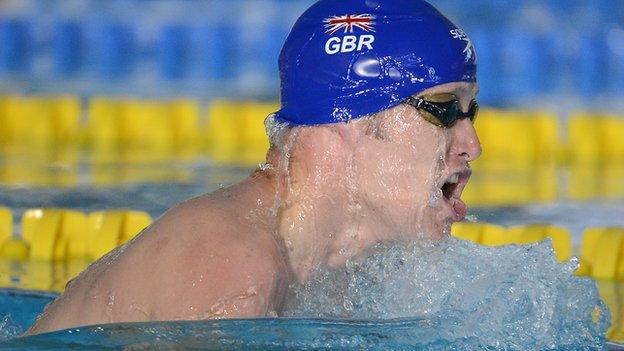 Swimmer Sascha Kindred looks set for another major championship appearance at the age of 36 after making the qualifying time for the IPC European Championships.

Kindred, a six-time Paralympic champion, made his major international debut at the 1994 Worlds in Malta.

He reached the standards in the S6 50m freestyle and the SM6 200m medley at the British trials in Glasgow.

The Europeans take place in Eindhoven from 4-10 August.

There was also a world best for Bethany Firth who clocked two minutes 24.89 seconds to win gold in the SM14 200m individual medley at the trials, which double as the British Para-Swimming International meet.

Firth's time is a huge improvement on the 2:29.71 which was clocked by Marlou van der Kulk of the Netherlands on her way to winning gold at last year's World Championships.

The 18-year-old from Northern Ireland, who won 100m backstroke gold at the London Paralympics, is in the process of switching nationalities from Ireland to Great Britain - a move which has also ruled her out of the Europeans.

"I never expected a time like that," she said. "The medley is a new event for me and I'm learning how to pace it and it has all gone well."

Preston swimmer Stephanie Slater set a new European record of 30.87 seconds to win silver in the 50m freestyle, beating the 31.21 set by fellow Briton Heather Frederiksen in 2009 and also securing a European qualifying time in the event

"I'm really happy - I wanted to get under that 31 second mark," she admitted. "I gave it my all in the heat and the final. I didn't swim the event last year so to qualify for the Europeans and set a new European record is great."