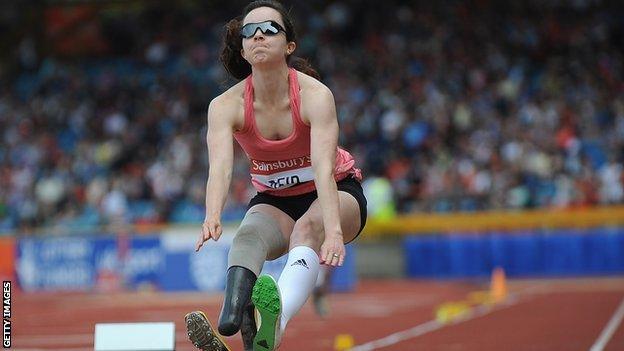 Paralympic long jump silver medallist Stef Reid hopes her new world best can be the catalyst to a successful 2014 season.

"I knew I could do it and I celebrated," Reid told BBC Sport.

As British athletes, we are so lucky to get some great opportunities to compete in front of a home crowd and I think this is the best country in the world to be a Paralympic athlete

"But at the same time, this isn't the end goal - there is still a lot more work I need to do."

Reid, who was born in New Zealand to British parents and represented Canada at the 2008 Beijing Paralympics before declaring for Great Britain in 2010, had her right leg amputated below the knee following a boating accident when she was 16.

But after winning silver in the combined F42/44 category at the Olympic Stadium with a personal best of 5.28m, Reid had a nightmare last year, culminating in finishing last in her event at the IPC Athletics World Championships in Lyon. She believes she has turned the corner, however, with the help of coach Rana Reider.

"I knew I needed to change things after the Paralympics and I finally got sorted out by last May and had started working with Rana," she explained.

"At the back of your mind you hope things will work out from the beginning but it takes time when you go to a new coach and I didn't realise how bad things were going to get.

"I will never forget how terrible Lyon was and I never want to feel that again. It was so below what I was capable of doing, but meeting Rana has given me the tools to work with and it feels great.

"I've had to put my trust in Rana and his coaching methods but also had to be patient, which is tough for me because I'm incredibly impatient. But training has been going really well and I feel really strong and confident when I step out."

Having not jumped over five metres in any competition last year, Reid jumped 5.16 at an event in Gainesville, Florida before her world record leap and for good measure she also ran a personal best of 13.80secs in the 100m.

She still harbours hopes of getting the 6.20m able-bodied qualifying standard for the Scotland Commonwealth Games team but admits that may be beyond her before the 10 June deadline.

Next up are the IPC Grand Prix meetings in Arizona, USA on 10 May and Nottwill, Switzerland on 18 May, as well the Diamond League meeting in Glasgow on 11 July.

However, her main focus for the year is the European Championships in Swansea from 18-23 August where she will face Lyon gold and silver medallists Iris Pruysen of the Netherlands and Frenchwoman Marie-Amelie Le Fur.

"I'm really lucky to have strong Euro rivals so the Europeans will be a big competition for me," she said.

"As British athletes, we are so lucky to get some great opportunities to compete in front of a home crowd and I think this is the best country in the world to be a Paralympic athlete.

"I'm giving myself the best opportunities I can to get the Commonwealth Games distance and I think I will eventually do it but I don't have too many competitions left.

"I like to make tough goals and I will keep going with that target in mind."