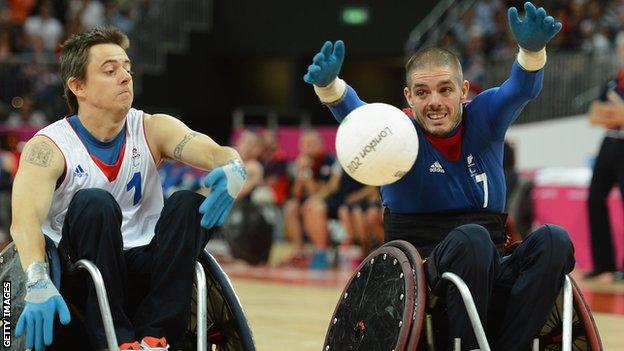 The tournament will be held at London's Copper Box Arena during the Rugby World Cup.

Wheelchair rugby, known as murderball, attracted sellout crowds during the 2012 Paralympics and has seen a big increase in participants since.

"Events like that are very important for the future of the sport," Scotsman Kerr, 32, told BBC Sport.

"There is such a big interest in the Rugby World Cup so having this event in conjunction with it is a huge opportunity and hopefully it will have a snowball effect.

"The game was a huge hit at 2012 and each game we played in London was in front of 10,000-strong crowds so hopefully we can experience that again."

The competition, to take place from 11-16 October, will feature eight of the best teams in the world, including Paralympic champions Australia and silver medallists Canada as well as world champions USA, Japan, South Africa, France and the hosts.

At Wednesday's launch at City Hall, Mayor of London Boris Johnson and England rugby union international Mike Brown, who is an ambassador for the sport, tried out the game with members of the GB squad.

The tournament will run alongside the Rugby World Cup, which will take place in England and Wales from 18 September-31 October.

GB Wheelchair Rugby chief executive David Pond admits that although the sport has benefited from 2012, there is more work to do.

"We want the World Challenge to be a festival of rugby where people can see some top-class action but get as many people involved and also have it as a fundraising opportunity to take the sport on," he said.

"Our aim in the future is to give anyone the chance to experience the joy of the sport and allow as many people have a club near them where they can enjoy it but we need to raise more money to enable us to do that."