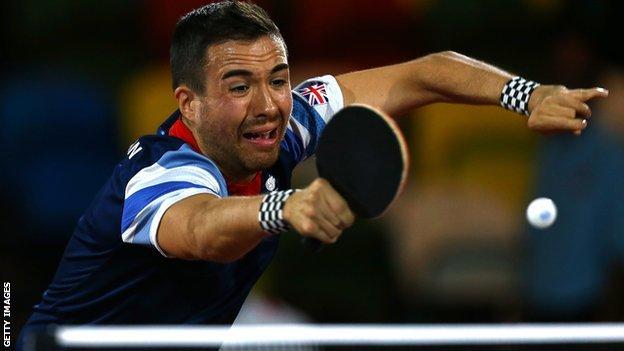 Britain's Para table tennis players finished with 12 medals after a strong display in the team events at the Slovenia Open.

Rob Davies and Will Bayley both added team golds to their singles titles.

Davies and team-mate Paul Davies beat the Netherlands 3-1 in the Class 1 final.

Bayley teamed up with Paul Karabardak and Billy Shilton to defeat a Belgium/Netherlands combination in the Class 7 decider.

Dave Wetherill added gold to the bronze he won in the singles, winning the men's class 6 event with the Croatian Pavao Jozic.

"We really believed we could win today," said world number two Bayley. "We might not have been favourites going into the final but I just stayed really cool and calm.

"I think I just had the edge today and it was great to get the gold medal. Paul played brilliantly in the doubles - that was probably the best we've played together in the doubles."

Rob Davies and Paul Davies came though a tough semi-final against Italy and won their opening two games against Germany in the final.

Germany came back to win the doubles before fought 3-1 before Rob Davies recovered from a slow start to win his second match and give GB a 3-1 victory.

"I needed a lot of energy to pick myself up after the doubles," he admitted, "but I managed to start playing a bit better and he was getting a bit nervous.

"Once I was ahead I just tried to keep it going but there were some very close points and I managed to keep my cool. That's the biggest part of my game at the moment - keeping my nerve and fighting."