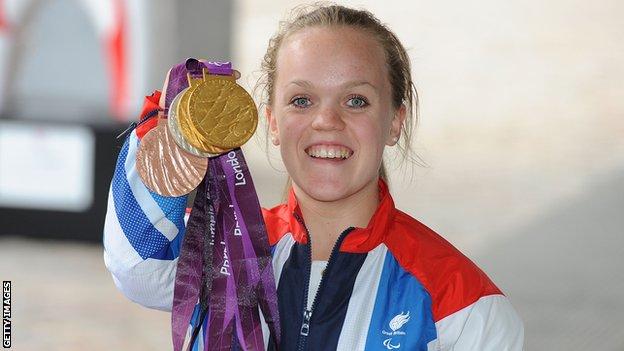 British Para-Swimming's national performance director believes the changes he is implementing at the National Performance Centre will boost the team's gold-medal tally at the 2016 Paralympics.

But Chris Furber told the BBC: "The athletes know the performances they gave in London won't be good enough to win the medals we need in Rio.

"We need to change their mindset about how they think about performance, and if we do that I've no doubt we'll win more golds than we did in London."

Furber spent 12 years working for British Cycling, including on its para-cycling programme, before taking up his current role in May 2013.

One of his main contributions since has been to establish a National Performance Centre in Manchester, where elite para-swimming athletes can train and take advantage of resident coaches and sports scientists.

Five athletes have moved to train there permanently, and Furber expects that number to double by the end of the year.

"It's not compulsory for athletes to come to Manchester, but we want them to perceive the value of what we're offering here," he said.

"You're getting access every day to all of the coaches, the physios, the doctors, the conditioning experts - all professionals working to make you go faster."

He does admit, though, that one of the biggest challenges is breaking with traditional methods within the sport.

"Our swimmers are spread around the country in home programmes, which takes a bit of getting used to," he said.

"They are comfortable in their home environment, so it's a big culture change for the sport.

"There was a recognition that we need to do something differently to really be competitive and take the sport forward on the world stage.

"We need to get better at focusing on the real key elements of performance. But there's a willingness to change and to learn within the athlete group."

For Furber, some of that change comes not only from the experience and help of his coaches and support staff, but from the swimmers themselves.

"My philosophy is to give responsibility to the athletes - I'm not going to be standing on that podium," he said.

"We want them to be getting personal bests by the time we get to Rio and to do that they need to take responsibility."

After working under Sir Dave Brailsford at British Cycling for so long, it is little wonder some of the 'marginal gains' strategy, which has served that sport so well, has seeped into Furber's ethos.

"It's about looking at every tiny detail which will add up to a great result when we get to Rio," he said.

"It's a tough environment, and the number of gold medals returned by British Paralympic swimmers has gone down Games on Games.

"We need to plan better and make sure that, every time we get in the water, we're doing something that's going to help return a gold medal when we get to Rio.

"We're in a sport where you can win or lose a gold medal by hundredths of a second.

"I knew British para-swimming would be a big challenge - and it's been exactly that - but we're definitely making progress."