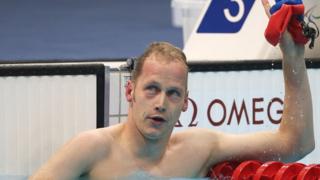 BBC Sport catches up with swimmer Sascha Kindred, as he prepares to notch up another major championship appearance at the age of 36.

The six-time Paralympic champion made his major international debut at the 1994 Worlds in Malta, and he is set to take part in the IPC European Championships after reaching the standards in the S6 50m freestyle and the SM6 200m medley at the British trials in Glasgow.

The IPC European Championships take place in Eindhoven from 4-10 August.