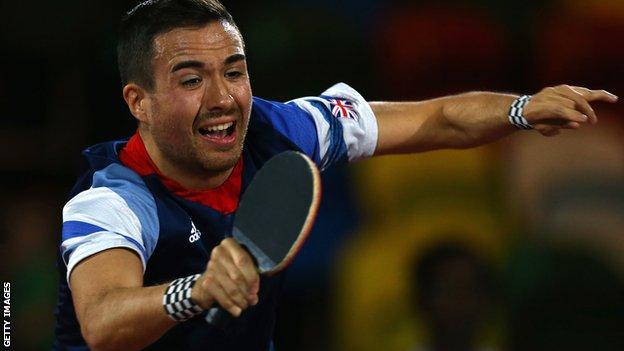 Britain's Will Bayley won the world para table tennis championship with a 3-2 victory over world number one Maksym Nikolenko in Beijing.

The gold medal adds to the European title the 26-year-old claimed in 2011.

Bayley was born with arthrogryposis, a rare congenital disorder that affected all four of his limbs, and competes in the class seven category.

He won a high-profile silver medal at London 2012 after an emotional final defeat by Germany's Jochen Wollmert.

Bayley, from Poole in Dorset, said it was a special moment to beat Nikolenko.

"The tournament was very difficult for me. I had many tough matches," Bayley told BBC South Today.

"The final was unbelievable, it's one of the best matches I've ever played and it was special to win the match.

"There wasn't a lot between us but I gave everything and put my heart and soul into the match. Luckily for me it worked. It's the best match of my career."

There were also silver medals for Bayley's team-mates Rob Davies and Sue Gilroy in their singles events.

"I wanted the gold but I'm happy to get silver although I don't feel it at the moment," said Davies. "It was good to get to the final - there are so many good players here and I had a tough draw with some players that are awkward for me to play against so I was quite glad to come through those.

"You've got to take one match at a time and I just wish I had played a bit better in the final and finished it off with a bang."

"I'm really disappointed in how I played but I've just got to be proud of how well I've played this week," she said.

"I think the semi-final was my final really - I think it has been so long coming that it was quite overwhelming. I really wanted to play the Chinese girl and I was so up for it but on the table I just didn't play so I'm bitterly disappointed in that and quite deflated now. But I've got to take the positives from it."