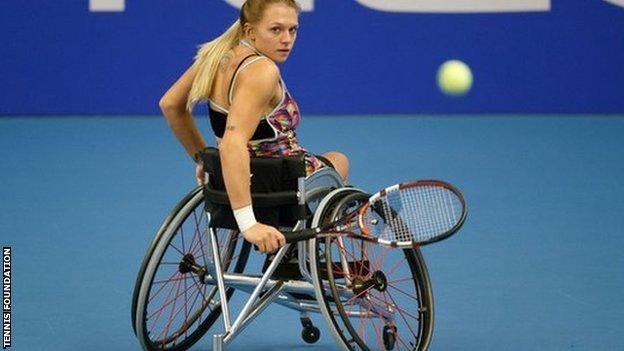 In September, Whiley became the first Briton to win the calendar year Grand Slam when her and doubles partner Kamiji triumphed at the US Open.

Whiley, who is currently ranked sixth in the world in singles, was aggressive from the start against the defending Masters champion.

She showed some skilful touches to record a first win over Kamiji since last year's Korean Open.

But the Briton knows that with two more round-robin matches to come before Saturday's semi-finals, she needs to continue to play at her best.

"I came out really focused and I really wanted it," she added. "My new coach Mike Price gave me some new tactics and fresh ideas so to come out onto the big stage and beat Yui is incredible.

"It is hard to play against her because we are friends and know each other so well and I did feel bad but this is business and I was on it.

"The win has given me a massive confidence boost but I'm not in the semi-finals yet so I will have to be focused again in my next game on Thursday and hopefully I can play like that again."

However, there was disappointment for the two other Britons in action with both Gordon Reid (men's) and Andy Lapthorne (quads) both losing in three sets.

World number three Reid was beaten by 5-7 7-5 7-5 by Belgium's world number five Joachim Gerard while US Open champion Lapthorne was defeated 6-2 4-6 4-6 at the hands of Australian Dylan Alcott.

"It's frustrating because I had my chances and I missed shots I shouldn't have," Reid told BBC Sport.

"I expected a tough match and I got one. I just have to try to take the positives into my next match."