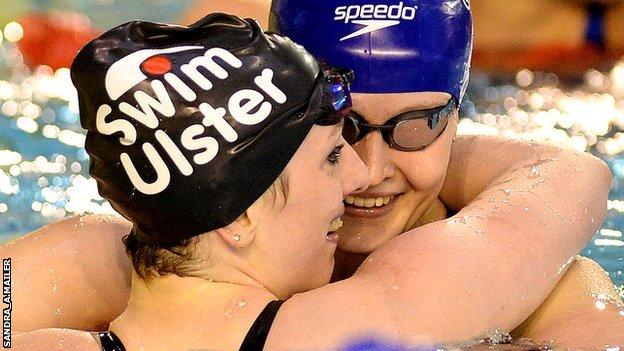 "It's been a tough weekend and I am getting tired," Firth told BBC Sport.

"But backstroke is a special event for me so I wanted to show what I can do and it was great Hannah was able to set a new record as well."

Russell, 19, revealed that it was Firth who had told her the record time at the end of the race.

"I was amazed to hear my time from Bethany," she admitted. "I felt really good out there and it means all of the things I have been working on in training have paid off."

Mullen started the day with a best of 37.66 seconds but he improved it to 37.03 in the heats and then took a further 0.12 seconds off that in the final.

"I managed to perfect my finish to get that extra tenth of a second," he said afterwards.

"I'm really glad to keep consistently getting PBs and that sets me up for my backstroke on Sunday."

There was also a World Championship qualifying times for James Crisp (S9 100m backstroke) and Alice Tai, who is one of BBC Sport's Paralympic Ones to Watch for 2015, in the S10 backstroke.