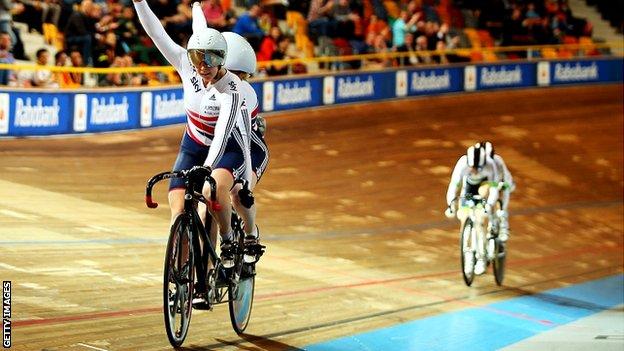 The GB team finished with nine medals after Crystal Lane's bronze in the C4-5 scratch race, but Dame Sarah Storey missed out in the same event.

Storey had claimed 500m time-trial and 3km pursuit golds earlier in the week.

The British team finished top of the medal standings in Apeldoorn by virtue of their seven golds, but China, Australia and the USA all won more medals in total.

Paralympic champion Fachie was piloted by Pete Mitchell and they looked in ominous form throughout qualification and during the quarter-finals of their 200m B sprint event.

Their German opponents withdrew from the semi-finals and the British duo powered past Spain's Jose Porto Lareo and Jose Villanueva Trinidad to win the final inside two of the regulation three heats.

"I'm just delighted to get another title," said Fachie, who has the degenerative eye condition retinitis pigmentosa.

"It's never easy," said Thornhill. "You can never take anything for granted - these races are always hard.

"You can make it easy for yourself being tactically aware, and Scotty was great on the front of the tandem today."

Pilot Mitchell said: "It went according to plan - the guys we raced were experienced so any mistakes we made would have been capitalised upon."

Lane won 500m time-trial silver behind Storey earlier in the week and initially crossed the line in the 10km scratch race in fourth position.

However, Argentina's Mariela Delgado was relegated for an infringement, moving the British cyclist up into third in her first-ever world scratch race.

"I went in with no expectations and I didn't really have a game-plan either, but I'm so pleased to come away with the medal."

The race was won by the USA's Greta Neimanas, with Anna Harkowska of Poland second and Britain's Storey seventh.