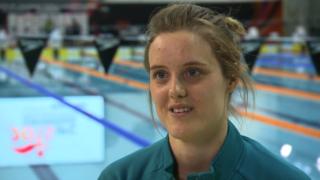 Among them was Australia's Ellie Cole, who had her right leg amputated when she was three through cancer, but has gone on to become one of her country's leading Paralympic stars.

The 23-year-old, from Melbourne, made a big impression in Glasgow with a gold medal and a new world record in the S9 100m backstroke less than two years after potential career-ending surgery.

BBC Sport's Kate Grey caught up with her to find out more about her new outlook on the sport since the London 2012 Paralympics.