With a year to go to the start of the 2016 Rio Paralympics, Great Britain's Paralympic hopefuls are dreaming of winning medals in the first Games to be held in South America.

The GB team enjoyed a successful time in London, winning 120 medals, including 34 golds, to be third in the medal table behind China and Russia.

Hopes are high that even though standards are rising in Para-sport, Britain's elite can maintain their run of form in Rio and come away with a similar number of medals.

And those who enjoyed that gold medal-winning feeling three years ago will be keen to retain their titles.

BBC Sport looks at some of those who were top of the podium at London 2012 and assesses their medal hopes for Rio.

Simmonds has come a long way from the wide-eyed 13-year-old who cried tears of joy after winning gold at the Beijing Games in 2008.

She described the hype around London 2012 as "very tough" but the poster girl of the Games overcame the pressure to win two golds, beating American rival Victoria Arlen in a thrilling 400m freestyle.

Arlen has been told her disability no longer permits her to compete in the Games but Simmonds has two new rivals in Ukraine's Yelyzaveta Mereshko and Australian Tiffany Thomas-Kane, who herself won gold at the 2015 IPC Swimming World Championships in Glasgow last month as a 13-year-old.

And it is putting pressure on Simmonds to retain top form.

Now based in Manchester, she came away from the Worlds with a single gold in the 200m medley, which she won in a world record time, as well as a silver and two bronzes but she faces a tough 12 months to find out whether she can retain her crown as British Paralympic swimming's golden girl.

The Worlds were a wake-up call for the 20-year-old who admitted after missing out on a medal in the 100m freestyle: "I didn't expect the world to be moving forward so fast. It is incredible for Para-sport but I need to move forward a bit more with it." 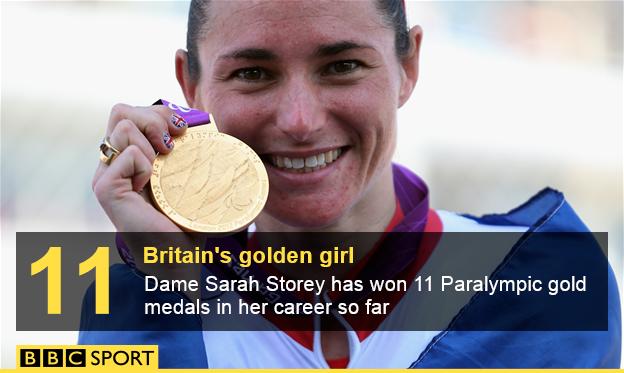 Storey's four gold medals from the London Games saw her become Britain's most successful Paralympian of the modern era with 11 golds among her overall tally of 22 medals.

And the 37-year-old from Manchester has not been resting on her laurels since the Games.

Now the mother of Louisa, who was born in June 2013, Storey won gold at both the Para-cycling Track and Road World Championships in 2014 and 2015 to show she will once again be the one to beat in her category in Rio.

She showed her dominance in her events at the recent Road Worlds in Switzerland, winning her time trial by over two minutes and the road race by more than eight minutes.

As well as her Para-sport exploits, Storey and her husband Barney, who won gold in the tandem sprint events in London as pilot to Anthony Kappes, have set up their Pearl Izumi Sports Tours team where she has also enjoyed success on the road against able-bodied rivals.

Maybe the most painful part of 2015 for Storey was when she narrowly failed to break the hour record in London in February.

The 'Weirwolf' shone on the track at the Olympic Stadium, thrilling the crowds with his three victories before dominating on the streets of the capital in the marathon.

But despite Commonwealth Games gold in Glasgow last year, Weir, 36, has found the going tougher than he would have liked post-London.

Weir's 2015 has also not been entirely successful - he was beaten in a sprint finish in the London Marathon by American Josh George to leave him stuck on six wins in the race.

Then at the Anniversary Games in London in July he struggled with illness and could only finish fifth in his T54 1500m race, raising fresh questions about his form.

Whatever he decides to do for the remainder of 2015, you cannot rule out Weir once again being a force to be reckoned with in Rio.

Peacock came to London as a 19-year-old and the 100m world-record holder in his T44 amputee sprint category.

After famously silencing the crowd who were chanting 'Peacock, Peacock' on the start line, he went on to win Paralympic gold.

That race saw a new guard emerge with Peacock followed home by American Richard Browne and that rivalry is one that is simmering nicely a year out from Rio.

The Briton may be the one with the medals - gold at the World Championships in Lyon in 2013, followed by European Championship success a year later - but Browne is the faster one, beating Peacock's world record at the 2013 Anniversary Games.

Their latest meeting in London in July resulted in another win for Browne but at last month's Parapan American Games in Toronto, the rivalry took on a new perspective when American Jarryd Wallace beat Browne's world record with a new time of 10.71 seconds

Throw Brazil's impressive double amputee Alan Oliveira into the mix and it adds extra spice to next year's Rio showcase.

Although Peacock is safe in the knowledge that when it comes to major championships he delivers, the rest of the field are gunning for that 100m title which could be one of the races of the Games.

Things are not guaranteed to stay the same in Paralympic sport, something Welsh thrower Aled Davies has reluctantly had to accept.

Three years ago in London, Davies first won bronze in the shot put in his F42 category while competing against less disabled F44 athletes. 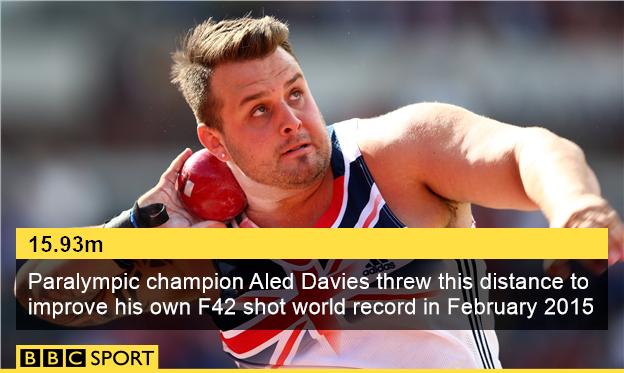 But he then added to Britain's gold-medal tally with success in the discus in a new European record.

World titles in both events followed in 2013 but then Davies was given the shattering news that the discus would not be part of the Rio Paralympic programme, denying him the chance to defend his crown.

In 2014 he captained the Welsh team at the Commonwealth Games in Glasgow where he won discus silver behind GB team-mate Dan Greaves but since then it has been all change for 'The Bear' with a new coach, a new technique and a four-stone weight loss.

His 2015 has been interrupted by a hernia operation, leaving him facing a race to be fit for the World Championships but he will be hoping to retain his world titles before focusing on shot put glory in Rio.

Davies is not alone with fellow gold medallist Josie Pearson also seeing her seated discus event dropped from the programme.

Pearson has now switched sports to hand-cycling and is hoping to represent GB in a third Paralympic sport.

The British Para-dressage team were one of the success stories of London 2012 with 11 medals, including five golds.

Pearson, appearing in his fourth Games, played his part with team gold and individual silver and bronze.

While some may have been thrilled with that haul, it ended the 41-year-old's 100% per cent Paralympic Games record which had yielded nine golds prior to London.

Far from being disheartened, Pearson now has a new horse Zion and after a hat-trick of golds at last year's World Equestrian Games, the pair are preparing for the European Para-dressage Championships later this month.

"The loss in London was more of a shock for everyone around me," Pearson told BBC Sport.

"Last year's Worlds was written as a comeback for me but we were all realistic after London because working with animals doesn't always go to plan."

Rio is definitely on the horizon for the pair with the GB team having already secured four qualification slots for the Games but there will be strong competition from the likes of team-mates Sophie Christiansen, Natasha Baker, Sophie Wells and Anne Dunham, who will also compete at the Europeans.