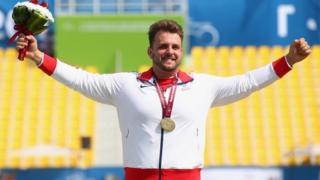 Aled Davies says he is delighted to "deliver when it matters" after throwing a new championship record in the F42 shot put, to win Britain's first gold on day one of the IPC Athletics World Championships.

Iran's Sajad Mohammadian was in front after throwing 14.54 but Davies's 14.88 in the penultimate round put him ahead.