The International Olympic Committee will soon "have to step in" over the design of the running blade, according to its inventor.

South Africa's Oscar Pistorius was the first amputee sprinter to compete with able-bodied athletes at London 2012.

Pistorius was cleared to race by the Court of Arbitration for Sport and reached the 400m semi-final in London.

Inventor Van Phillips believes blade runners could soon "run faster than we have seen before" as designs improve.

"At some point they are really going to have to define what can be used," Van Phillips told BBC Radio 5 live.

Pistorius was originally banned from competing against able-bodied rivals by athletics governing body the IAAF before later being cleared to run by Cas.

"Oscar was first told he had an unfair advantage," said Phillips. "He went to a group of engineers, some of whom I know, and they showed after tests that he didn't have an advantage.

"I happen to believe that's not quite the way it is."

But German long jumper Markus Rehm will miss the Rio Olympics after failing to prove his prosthetic leg did not give him an advantage.

Phillips added: "It is a matter of time before you get a genetically gifted athlete who loses his leg and with a running prosthetic, he will run faster than we have seen before.

"It may not be in the 100m where the blocks make it more precarious, but maybe in the 200m where starting blocks aren't as important.

"The design of sprinting legs is still in its infancy and eventually the authorities will have to step in."

Where did the design come from? 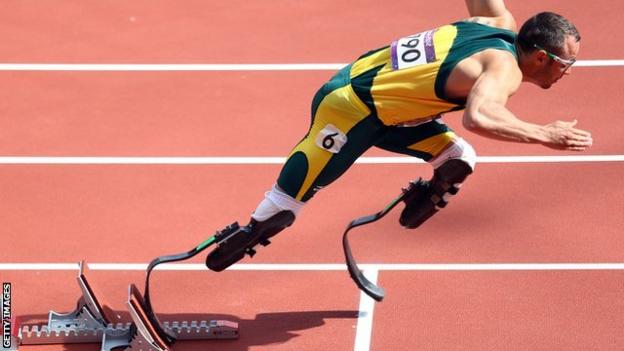 American Phillips shaped the future of Paralympic competition after he himself received a substandard prosthetic after he lost his leg in an accident in 1976.

With a background in engineering, it was the technology of swimming springboards that provided the concept of blades for athletes.

"We'd bounce on that board and it bends and swings you up," he said.

"I was going "come on, you've got to be able to put that into a foot."

Having spent 15 years working and developing blade technology, Phillips believes the current design propels athletes by a number of inches.

"Most were failures, some worked but were too complex and cost too much.

"This final evolution is a design that no matter how you land on it, it can have vertical travel for up to three inches."