Athletics is one of only two sports at the Paralympics, along with swimming, which caters for competitors from all physical impairments groups, visual impairments and those with a learning disability.

Athletes competing in the track (T) and field (F) events are divided into classifications to ensure fair competition.

Classes 11-13 cover visual impairment with 11 the most severe up to 13 for athletes with more vision.

Class 20 is for athletes with a learning disability.

Classes 33-34 is for athletes with cerebral palsy (or similar neurological conditions) who are also wheelchair users.

Classes 35-38 is for athletes with cerebral palsy (or similar) who are ambulant and have the ability to run.

Classes 40-41 is for athletes of short stature.

Classes 42-47 is for athletes whose lower and/or upper limbs are affected or amputated.

Classes 51-58 is for athletes with different levels of spinal injuries and amputations who compete in wheelchairs either on the track or in field events.

In track events, the winner is the fastest athlete to complete the distance of the race. In some field events, however, the athlete who throws the specified item furthest is not always the outright winner as results can be 'factored'.

This means that the results take into account the degree of the impairments of each competitor. After each throw, the athlete secures a number of points based on a combination of the distance and the level of impairment. The gold medal will go to the athlete with the most number of points at the end of the competition.

In 'combined' events, where multiple classification groups compete against each other (indicated by the presence of a forward slash in the event title e.g. F32/51 discus or F55/56 discus), athletes break records within their classification group only.

Rules ensure that athletes who have visual impairments can be assisted by guides on the field or the track without giving the athletes any unfair advantages. 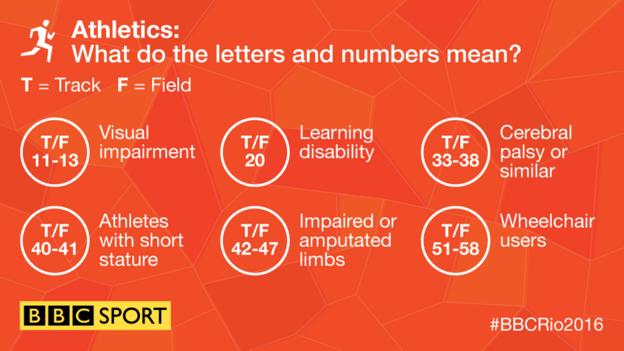 Who are the British medal hopes?

The team won 29 medals, including 11 golds, at London 2012 and have continued to impress at world and European championships over the four-year cycle.

While London champions David Weir, Hannah Cockroft, Aled Davies and Jonnie Peacock will be back for more, a number of new, talented athletes have emerged, including the likes of Georgina Hermitage, Jo Butterfield and Sophie Hahn, who all won gold medals at last year's IPC World Championships in Doha.

Who are the other challengers?

With Russia banned from all Paralympic events, China and the USA will be expected to dominate matters with American wheelchair racer Tatyana McFadden among those hoping to make her mark on the Games as she goes in seven events from 100m up to the marathon.

Home nation Brazil will be hoping to impress, especially in the events for athletes with a visual impairment.

British long jumper Stef Reid is married to Canadian wheelchair racer Brent Lakatos and both are aiming to win their first gold medals in Rio.

Brazilian sprinter Terezinha Guilhermina, who competes in the T11 category for blind athletes, is known for the colourful eye-shades she wears while competing. She designs her own masks and wears a different one for each race, meaning her colourful collection is in the hundreds.