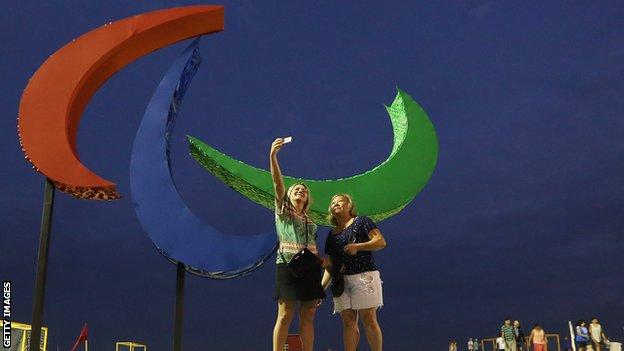 Claims that the classification system for disabled athletes is being manipulated to boost medal chances has been rejected by British Paralympic Association boss Tim Hollingsworth.

No advantage was being sought for Britain's 264 athletes in Rio, he said.

Concerns have been raised that some Paralympic athletes are being deliberately mismatched.

But Hollingsworth said: "We are here to win medals, but within both the letter and the spirit of the Paralympics."

Baroness Tanni Grey-Thompson, an 11-time Paralympic champion, has said the issue "goes to the heart of the integrity of the sport".

The International Paralympic Committee (IPC) says the system is always under review, while UK Athletics said it will review classifications after Rio.

The Paralympics start on 7 September and run until 18 September.

The classification system puts athletes into groups depending on the level of their impairment to try to ensure fair competition.

But British T37 200m sprinter Bethany Woodward told the Sunday Times she was withdrawing from the ParalympicsGB squad for Rio and had lost faith in the way the team was selected.

Woodward, 23, who has cerebral palsy, said: "I represented my country for a long time but if I can't compete like I used to compete, because they've brought in people who are not like me in terms of disability, what's the point?"

UK Athletics has said that Woodward was not in consideration for selection because she had not met the necessary criteria.

It has also been claimed some competitors try to manipulate their classification to compete against athletes with more severe impairments and therefore improve their chances of success.

A recent IPC report found no clear evidence of "intentional misrepresentation" after analysing some 80 cases.

Asked whether there was a "risk" some countries were too keen on winning medals, Craven said he would not "respond to that question", adding: "All countries are very keen on performing well and performing within the rules."

But Hollingsworth insisted: "We are very focused on getting the right athletes in the right class. We've got nobody going into the Games in our view who doesn't have the appropriate classification.

"I dispute a view that what has been discussed over the last few days should lead to conclusion there is anything along those lines going on."

The reality is athletes will fall one side of the line or the other and that's what happens when you have these groupings.

The old system used to be very disability specific. They're moving it to sports-specific so it's how your impairment affects you doing that sport.

We have to take it on trust that the athletes are in the right class.