Great Britain equalled their tally of gold medals from London 2012 by winning three in the space of 20 minutes on the sixth evening of the Rio Paralympics.

Ellie Simmonds and David Weir both relinquished titles they had won at London 2012 in a packed evening of events.

Simmonds was disappointed with her S6 400m freestyle bronze, which added to the gold she won on Monday.

Weir, meanwhile, finished fourth in the T54 1500m - at what he later described as "probably my last Paralympics" - as Thailand's Prawat Wahoram won gold.

Ollie Hynd claimed his second medal of the Games, finishing second in the men's S8 100m backstroke behind China's Zhou Cong, who won in a world record time of 1:02.90.

There was also bronze for Jordanne Whiley and Lucy Shuker, who beat Japan's Miho Nijo and Yuii Kamji 6-3 0-6 6-1 in the women's wheelchair tennis doubles.

Britain's medal haul has been helped by the absence of Russian athletes from the Games.

They won 102 medals in London four years ago - including 36 golds - as they finished second in the medal table.

However, they have been banned from competing in Rio as punishment for a state-sponsored doping programme.

Millward, who won four silvers and a bronze at London 2012 and had claimed two bronzes so far in Rio, finally added a Paralympic gold to her collection with an emphatic victory.

She finished over four seconds ahead of her nearest rival - Australia's Maddison Elliott - in a new Paralympic record time of 1:13.02.

The 34-year-old is the British record holder in the 100m backstroke at 15 and was hoping to qualify for the Sydney 2000 Olympics before she was diagnosed with multiple sclerosis aged 17.

She told BBC Radio 5 live: "Eighteen years of trying and here I am with a gold medal at last.

"I'm hopefully proof to people that as long as you keep on fighting, it will be worth it in the end."

Clegg claimed her second gold medal of the Games, finishing ahead of Chinese duo Liu Cuiqing and Zhou Guohua, after home favourite Guilhermina Terezinha was disqualified for a false start.

"I've massively surprised myself," said Clegg. "I've had a really tough year and if you'd asked me 10 months ago, I'd have said this wasn't possible."

As Clegg was celebrating her victory, Wylie was narrowly winning a fiercely contested 50m freestyle contest in the pool.

The 19-year-old's time of 25.95 gave him victory over Australia's Timothy Diskin, with all eight competitors separated by just 0.81secs.

"Wins for Steph Millward and Matt Wylie at the pool on Tuesday made it nine golds for the British swimming team and means they have already surpassed their total of seven from London 2012 with four days of competition still to go.

"Millward has certainly benefitted from her reclassification earlier this year, which means she now swims against more disabled swimmers than she did previously.

"She has described the 100m backstroke as her event and a new Paralympic record saw her claim her first Paralympic title in her third Games.

"Wylie is one of a number of talented youngsters coming through into the GB set-up and he showed plenty of grit and determination for the perfect finish in the splash and dash 50m freestyle."

Hermitage, who quit athletics as a teenager before London 2012 inspired her to return, had been tipped to possibly lower the world record beneath the 60-second barrier.

But, in 36C heat and without competition to push her along the home straight, the 27-year-old cerebral palsy athlete from Guildford could not quite match those expectations.

"Everyone was expecting me to win this one and I did feel the pressure - I always do, I think I'm a natural worrier," she said.

Hermitage could claim a third gold in Thursday's 4x100m relay.

Arnold is competing in her third Paralympics at the age of just 22, but this is the first for which she favourite for gold.

The world number one and two-time world champion justified her status, twice breaking the previous world record of 41.15m as she held off the challenge of New Zealand's Holly Robinson.

"I actually thought I had one more throw," she told Channel 4. "When my coach told me I had won gold I just burst into tears. I didn't expect to break the world record by that much."

Davies, a former semi-professional rugby player who suffered a serious spinal injury in a collapsed scrum in 2005, showed steely determination to close out victory.

"I must thank everybody for their support," said the 32-year-old. "We've been working hard behind the scenes and it has paid off. I'm chuffed I managed to keep it together.

"I haven't beaten any of the Koreans for a while, so to do it on the biggest stage is brilliant."

The 21-year-old said: "It was just one of those days I think, after last night maybe, doing a world record and having a late night, but normally I can do that - I just don't know what happened."

Inspired to try a new sport?

Find out how to get into disability sport with our special guide.

Weir, 37, surrendered his title in the T54 1500m, reaching the bell in seventh and leaving himself too much to do.

"I don't want to be making excuses because we all have the same problems but I am really struggling to get the tyre pressure right out here - I don't know if it's the heat or the humidity.

"I feel I'm getting better with every race and I still have two individual and a relay to go," he said.

Weir will compete in the men's 800m T54 heats on Wednesday and the 4x400m relay and marathon. 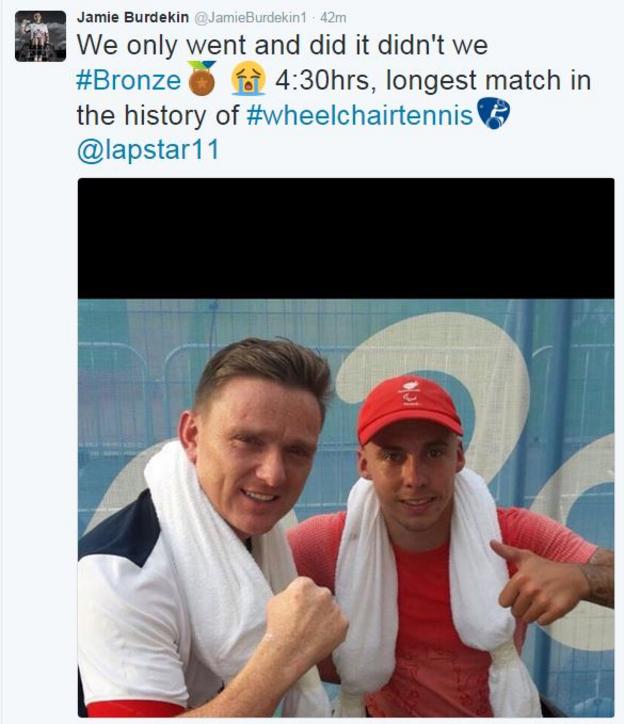 Britons Andy Lapthorne and Jamie Burdekin took bronze in the men's quad doubles wheelchair tennis, in what was the longest tennis match at a Paralympics, at four hours and 25 minutes.

Burdekin said: "That heat is ridiculous, it's the hottest I've ever played in. I nearly died in the first set. As soon as the second set was over and we had the break, I went to the toilet and put my head in a bowl of water."

In an all-Polish fencing final, Adrian Castro possibly made future dinner conversations with his family a little awkward by winning bronze in the men's individual sabre event category B at the expense of his future father-in-law, Grzegorz Pluta.

Meanwhile, America's Tatyana McFadden claimed her second gold medal of the Rio Games and her fifth overall at the Paralympics by winning the women's 1500m T53/54 final.

China's Shang Guangxu, 21, smashed his own world record twice as he took gold with 6.77m in a superb men's long jump T37 final.

13:00 - Para-canoe makes its Paralympic debut with Brits in every race