The virus that caused Emma Wiggs to lose the use of her legs 18 years ago may remain a mystery - but her reasons for being a five-time world champion are less of an enigma.

"It made me more determined and more stubborn. Possibly, that is why I've ended up where I am today," the Para-canoeist told BBC East Midlands Today earlier this year.

That stubbornness has taken Wiggs to Rio 2016, ready to try and convert four years of winning into a Paralympic gold medal when Para-canoeing makes its debut at the Games on Wednesday.

Wiggs, 36, was 18 years old and on a gap year in Australia when she became ill. It changed her life forever.

"I was chasing and shearing sheep and working on a farm," said Harrow-born Wiggs. "About six weeks in I contracted a virus; we still don't know where from, but it basically left me paralysed in my arms and legs overnight

"I'm lucky that my arms recovered, but my legs didn't. I didn't want it to influence my future and what I wanted to achieve, my hopes and aspirations."

Wiggs went on to become a PE teacher and, after being discovered at a British talent day, captained GB's sitting volleyball team to a bronze medal at the world championships and then competed at London 2012.

She immediately set out to find a new challenge and, five months after sitting in a canoe for the first time, she was 2013 Para-canoe K1 sprint world champion.

Oh, and add a world record in there too.

"Right. The time has come. Three and a half years of hard work on the water and in the gym," she wrote in a Twitter post this week.

"It's been an incredible few years. I've done everything I possibly could to be the best I could be and that has got me here." 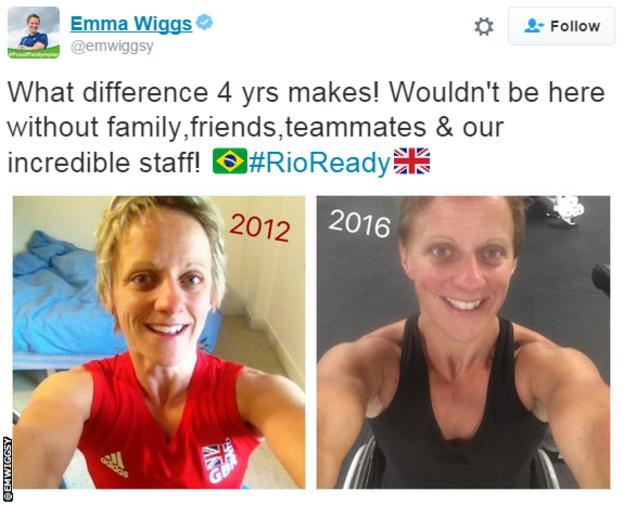