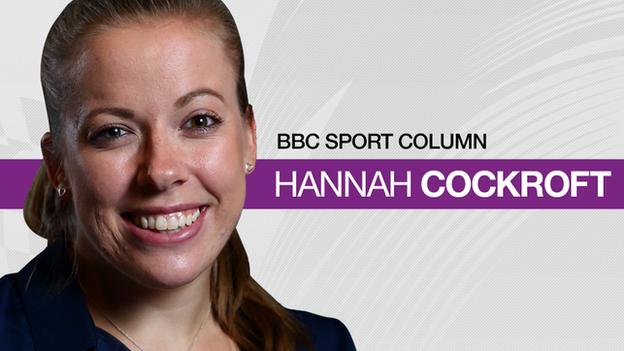 During Women's Sport Week 2016, BBC Sport will have a special column each day by a notable woman in sport. BBC Sport guest editor Hannah Cockroft, 24, who won double Paralympic gold at London 2012 and bettered that with a hat-trick at this summer's Games in Rio, talks about her 'love-hate' relationship with the word 'inspirational' and why Paralympians should get more prize money.

Rio proved that people are still interested in the Paralympics, and people still know my name and know what I've achieved, which is always a good sign!

The Paralympics had been pitied for so long, seen as the secondary Games, but that started to change at Sydney 2000. London then became a game-changer, certainly for British perceptions at least, and Rio has pushed our sport on further. But, even though things have got better, there is still plenty of room for improvement.

Aside from major championships, where we do get paid for competing, in most other competitions during the year we have to pay to enter races.

In 2014, I raced 53 times and won a total of £6,000 in prize money. That's not a lot. I am fortunate I get National Lottery funding, which is fantastic and an amazing help, but that just about covers my annual sporting costs. That's partly why I still live with my mum and dad.

Luckily, I've also got great sponsors, something all athletes really struggle to find and many don't have, but I wouldn't say I make money - mostly it goes on fuel, hotels, equipment, and by the end of the year I just about break even.

I don't want to make it sound like a terrible life. I'm not really hard done by and I'm fortunate to have the support I do, but it would be lovely to be able to afford to buy my own home and make a living from my sport one day, the way other sportspeople can.

I don't know how this compares to able-bodied athletes, but I can imagine they have far better earning potential.

Wheelchair road racers do get paid, again only if they win, but it's not physically possible for me - I would not get through a marathon - and neither is it on offer for my classification so I have to stick to the track.

Disabled athletes are normal people. Genuinely, we're like you, it's just that a part of us doesn't work. The fact we're alive isn't inspirational.

Each competition costs between £20 and £30 to enter, and generally we race in Stoke Mandeville, Bedford and Coventry so there's also travelling and hotel costs to add to that. Unfortunately, for a Yorkshire girl like me, there are no races in the north of England.

It all comes down to sponsorship of events and athletes. We know Olympians get paid for every event they do so why not hold Paralympic events alongside Diamond League events? Us Paralympians have our Diamond League equivalent, called the IPC Grand Prix, and we get to travel the world, but we still have to pay to enter that and there are nowhere near the prize funds on offer.

I understand the absence of prize money is because we don't draw large crowds and therefore commercial sponsors don't see any point in being involved, but Rio showed what can be achieved with the right focus and marketing as the Paralympics attracted bigger support than the Olympics.

'It's easy to lose motivation'

During the summer, at a normal track event, fans can see the likes of six-time Paralympic champion David Weir racing against someone who's just got in a racing chair for the first time - it's amazing. I think people should see that.

The sport's biggest names are there, supporting the grassroots, giving advice and passing on their experience but people don't know about it - and neither do they know they can watch for free yet the athletes have paid to be there.

The crowds are tiny. It's something we've got used to. It's almost always family supporting, and that's because people don't know these events are taking place. It goes back to the issue of sponsorship, of events and athletes.

As athletes we try to promote events on social media, through Twitter and Facebook, but we've only got a certain amount of reach.

If I were able to improve one thing about my sport it would be better advertising of events from all the relevant bodies responsible for promoting them. Let's get bums on seats!

To be honest, if you aren't focused on winning, you can lose motivation competing in front of sparse crowds, especially after a Paralympics.

People are often surprised to hear I do so many races a year as they only see or hear about me once every four years on TV.

It makes you question whether the Paralympic movement is really progressing. Are we making that much of a difference?

But occasions like London and Rio restore faith and, of course, we have the annual Anniversary Games in London helping keep the Paralympic athletes in focus too.

'Everyone should try track racing'

Sports facilities for disabled people have improved in this country. The biggest problem in attracting people to track racing is the equipment.

A race chair costs about £5,000, and just to afford that you have to fight for it. As of last year, my race chairs are sponsored, but before then I had to make a race chair last three years, when technically they're supposed to last 12 months, because I couldn't afford a new one.

Most people wouldn't buy top-of-the-range spikes if they wanted to try running, but there is no such thing as a cheap racing chair.

They're expensive no matter which one you want and, of course, it's not 'one size fits all' as we are all different shapes and sizes so the best chairs are made to fit.

It's about generating enough funding to ensure stock of chairs available for people to borrow so they can have a go.

There are certain pools around the country where people can try a chair, but if you don't live near London, Coventry or Leeds - I'm pretty sure those are the only areas where race chairs can be borrowed - you can't try the sport. It shouldn't be like that. Every sports club, every Harriers, in the country should have a race chair so anyone can give track racing a go.

Another problem which goes hand in hand with funding is coaching.

No-one shames the majority of the British public because they can't swim like Rebecca Adlington or run fast but, suddenly, everyone in a wheelchair has to be a wheelchair racer

There aren't enough coaches to cover all elite athletes so more funding needs to be put into the grassroots so knowledge can be passed on about how to push a wheelchair properly etc. It's an ongoing battle.

I was already involved in athletics, in seated discus, when I was spotted by British Athletics, who put me in touch with a wheelchair racing coach. Had it not been for them, I don't think I would have started racing because I wouldn't have known how to get a race chair.

Wheelchair racing will never be as accessible as going down to your local running club because it's not that easy, unfortunately, but things are being done through charity groups all the time to try to change that.

Half of the British population seem to think everyone can become a Paralympian, the other half understand it's not like that. Just as not every able-bodied person can run as quickly as Usain Bolt, or jump as far as Greg Rutherford, not every disabled person in a chair can push as hard as David Weir. It's a battle we're still fighting.

The perception that any disabled person can become a Paralympian is frustrating for Paralympians, but also for the wider disabled community because not everyone is going to be a sports star - it's physically impossible for them.

For people to look at them after watching the Paralympics and think 'you're so lazy, you could be on the track' is hurtful and it also dirties the legacy we're trying to leave behind.

No-one shames the majority of the British public because they can't swim like Rebecca Adlington or run fast but, suddenly, everyone in a wheelchair has to be a wheelchair racer.

What we do is a personal choice, we make a lot of sacrifices, work for hours every day and push ourselves really hard. Paralympians have had to overcome a lot of things, but some people can't overcome what they've got, nor do they have the support network to help them.

Let's celebrate the fact they can write, or sing, or do great things working in the community. Let's celebrate all those things as equally amazing. Everyone has different talents.

Some thought the message of Channel 4's 'Yes I Can' advert before Rio was 'yes I can do sport' but that wasn't the message behind it, the real message was 'you can do anything you want'.

I was told throughout my childhood I wouldn't be able to do sport, but now I'm an elite athlete. Who would've expected that? Certainly not the doctors who gave my parents little hope for me.

'Inspirational' has lost its meaning

There's been a debate recently over 'inspiration' and what it means within the context of disability. I have a love-hate relationship with the word. It gets thrown around so much. Every time someone describes a Paralympian as 'inspirational', I want to ask: "Why?"

Is it because I'm doing something with my life and you don't expect me to, or is it because I go fast and work hard? If it's the latter, that's fine, but if it's because I got out of bed today and didn't feel sorry for myself, then describing that as inspirational should probably stop.

Disabled athletes are normal people. Genuinely, we're like you, it's just that a part of us doesn't work. The fact we're alive isn't inspirational.

The word inspirational has lost its meaning. It's too easy to say inspirational. Saying it has become a habit so let's create a new word.