The 2018 Winter Paralympics will feature almost 600 athletes competing in 80 events across six sports.

It represents a notable increase on the 547 athletes who took part in the Sochi Games four years ago.

All have their own stories to tell of how they got to be part of one of the biggest sporting events in the world.

BBC Sport looks at some of the British team members hoping to shine in Pyeongchang, plus some of the international stars bidding to make an impact.

Para-alpine skiing pairing Menna and Jen, as they are better known, will be one of GB's leading medal hopes on their Paralympic debuts.

Fitzpatrick, 19, has been skiing since childhood despite being born with congenital retinal folds that mean she has no vision in her left eye and limited sight in her right eye.

Her guide Kehoe (34) is also an experienced skier and has been given time off from her role as an officer with the Royal Engineers to pursue the partnership with Fitzpatrick, which sees them descend the slopes at speeds of up to 100km/h while communicating via bluetooth headsets.

Pyeongchang will be particularly special for Kehoe, who was on track to compete as a guide at the Sochi Paralympics before she suffered a serious knee injury.

The pair have been in impressive form this season and will go in all five events in Pyeongchang as they chase a first Paralympic medal.

Less than two years after taking up skiing, the 28-year-old Scot finds himself ready to take on arguably the most gruelling Winter Paralympic challenges in the cross country and biathlon events.

Meenagh, a former Scotland under-18 rugby player, lost both his legs after stepping on an IED (improvised explosive device) while serving with the Army in Afghanistan. 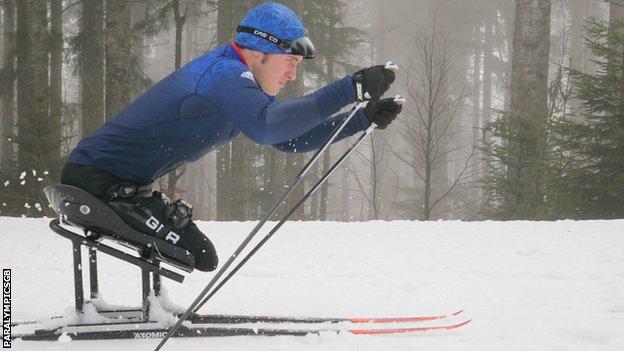 He took up rowing as part of his rehabilitation and became part of the GB Para-rowing squad, narrowly missing out on a place at the Rio Games, and also represented his country in the sport at the 2014 and 2016 Invictus Games, and in athletics at the 2017 event.

But it is in nordic skiing that he will make his Games debut as Britain's first Paralympic representative in the sport for 20 years.

Traditionally, the pathway from newcomer to elite competitor in the sport is between eight and 10 years - Meenagh has exceeded expectations by qualifying for Pyeongchang in a particularly short timescale, and is set to take part in six events across the two disciplines.

Like Meenagh, Pick saw his life changed forever in Afghanistan.

He was 18 and on his first tour of duty in the country when he suffered serious injuries to his leg after an explosion in January 2010. After lengthy treatment in the UK, his leg was amputated below the knee in August 2011. 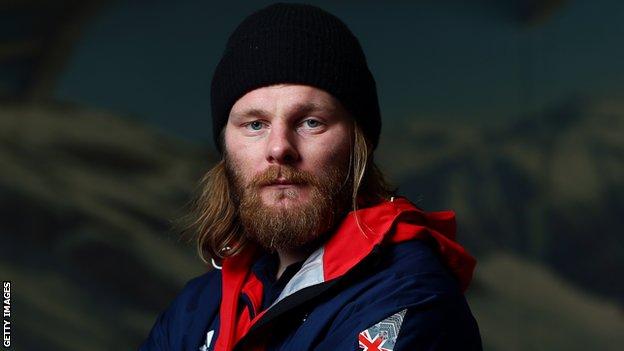 Pick, now 26, saw snowboarding on television while he was recovering and tried it for the first time on a trip to Colorado before going on an instructor's course.

He made his competition debut in 2014 and has developed rapidly as he worked towards becoming one of the trio, along with Ben Moore and James Barnes-Miller, who will become Britain's first Paralympic snowboarders.

Pick won silver in the banked slalom at last year's World Championships and is targeting going one better in South Korea, where he will also compete in the snowboard cross event.

Cross country specialist McKeever has 10 Winter Paralympic gold medals to his name already and while Gert Schonfelder's all-time record of 16 will be beyond his reach for these Games, success in Pyeongchang will see him inch closer to the German's mark.

The 38-year-old, who will be at his fifth Games, competes in the visually impaired category, having started to lose his sight aged 19 as a result of Stargardts disease, a congenital condition. 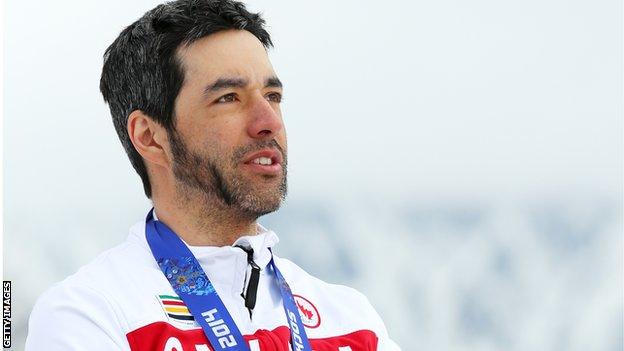 He looked set to create history in 2010 when, as well as being named on the Canadian Paralympic team, he was selected for the country's Olympic squad.

However, he was controversially not chosen to race in the 50km classic event - a decision that he said left him "crushed" - but he recovered from that disappointment to win three Paralympic golds, and repeated the feat four years later in Sochi.

McKeever's immense talent means finding a suitable guide for him presents plenty of challenges. His older brother Robin filled the role for a number of years before current guide Graham Nishikawa took over for Sochi.

His back-up guide Russell Kennedy already has experience of Pyeongchang having competed with the Canadian Olympic team last month.

If 23-year-old skier Walsh wants some advice on how to deal with the pressure of a Paralympic Games, he does not have to go too far for help.

Walsh is a good friend of Olympic giant slalom champion Mikaela Shiffrin - the pair went to pre-school in Vail, Colorado together and Shiffrin's mother was Walsh's first ski teacher - and they have stayed friends since. 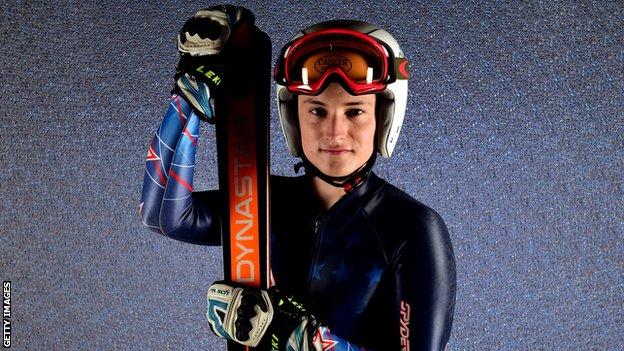 Nine years ago Walsh was diagnosed with Ewing's sarcoma - a bone and soft tissue cancer. Part of his lungs and pelvis were removed and his Olympic dreams were at an end.

But he recovered and took Shiffrin to his school prom in 2012 and, after going to watch his friend in action in Sochi four years ago, he learned to love skiing again, joining the US Paralympic team in December 2015.

Walsh finished 10th in the super-G and 19th in the super combined at last year's World Championships and while a gold medal would be a big ask, he will have one of the biggest stars of the sport cheering him all the way.

With both Paralympic and Winter Paralympic titles to his name, Bowden has nothing to prove - but Canada's failure to win Para-ice hockey gold since 2006 is an extra incentive for the 34-year-old to keep going at the elite level.

Bowden, who was born with a condition similar to spina bifida, won wheelchair basketball gold with Canada at the 2004 Paralympics in Athens but Para-ice hockey (or sledge hockey, as it has previously been known) has always had a special part in his life. 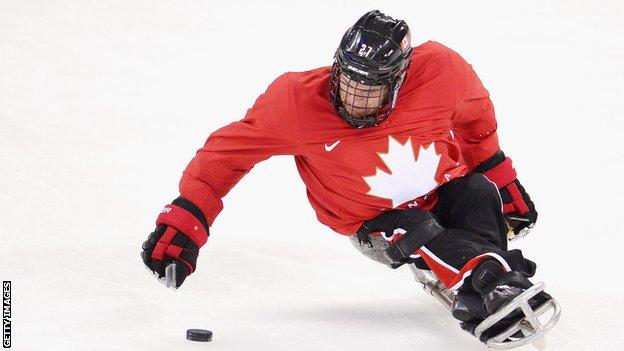 Two years after his first Paralympic title, he made it a double by helping Canada claim gold in Turin as they beat Norway in the final.

The team disappointed on home soil in 2010, finishing without a medal but won bronze four years ago, watching on as the United States took up the mantle of the top team in the world.

But with Bowden, previously a star in attack, now playing a more defensive role, Canada beat their North American rivals 4-1 to win last year's World Championship and they are confident they can finish on top of the podium again on the biggest stage of all.

Four years ago in Sochi, Mentel-Spee was on top of the world after winning the first ever female Para-snowboarding gold medal in the snowboard cross event, but the subsequent four years have been a challenge for the Dutch woman.

She was a talented able-bodied snowboarder in her younger days, competing at World Cup level, and qualified for the 2002 Olympics before being diagnosed with cancer and having her leg amputated as part of her treatment. 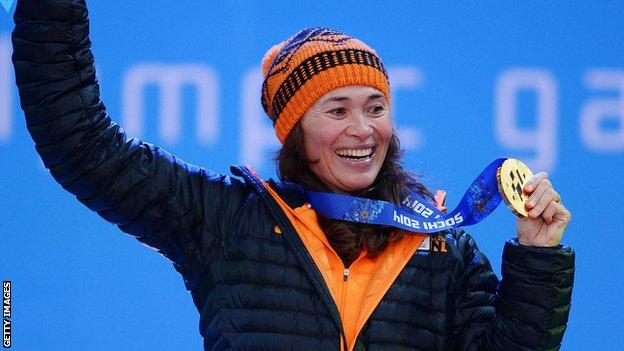 Mentel-Spee relearned her snowboarding skills and earned victory in Sochi as well as two world titles in snowboard cross and banked slalom in 2017, which should have put her in good stead for Pyeongchang.

Since then, however, she has needed more treatment for cancer and has had surgery twice in the past six months, most recently in January. But the 45-year-old wants to take her place in South Korea.

"For me it is more important to compete there than to win," she says. "Just being at the event with all my friends and showcasing the sport, that is the most important thing for me. I'm not really thinking about the results."

Masters' story echoes that of fellow US Paralympian Tatyana McFadden. She too was adopted from an orphanage as a youngster (aged seven) and brought to the US by her adoptive mother before going on to shine on the sporting stage.

She was born in Ukraine near the Chernobyl nuclear plant and suffered from a number of birth defects to her limbs which eventually resulted in both legs being amputated and her having to have multiple reconstructive surgeries to her hands. 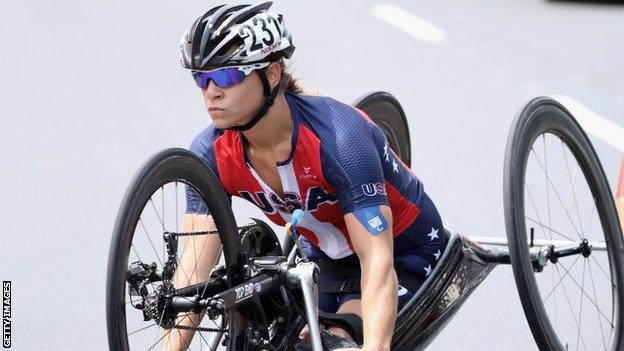 But she found a passion for sport, winning bronze in rowing at the London 2012 Paralympics before switching to cross country skiing and taking a bronze and a silver home from Sochi.

The 28-year-old tried another sport for Rio, claiming two top-five finishes in Para-cycling as she recovered from a back injury, but she could not stay away from the nordic disciplines.

She has improved her shooting skills for the biathlon events and as well as three cross country golds at last year's World Championships, added another gold and a bronze in the biathlon.

The US has never won Paralympic gold in women's cross country or biathlon events and the smart money is on Masters being the first to achieve the feat in Pyeongchang.

The fact Germany finished second in the medal table at the Sochi Winter Paralympics four years ago was largely down to Schaffelhuber.

The sit-skier won gold medals in all five events on the Para-alpine skiing programme, to make up more than half of her nation's overall gold medal tally of nine. 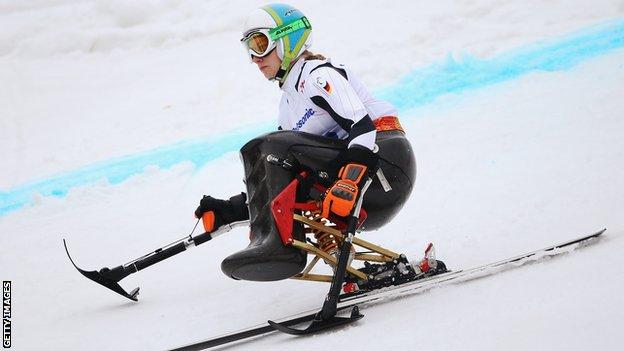 At last year's World Championships she won three golds and two silvers and in Pyeongchang will renew rivalries with the woman who beat her in those two events, Claudia Losch of Austria.

The German says she is going to retire after Pyeongchang but can she go out on a high with another clean sweep of medals?

Of all the teams at the Pyeongchang Winter Paralympics, the one that will surely attract the most interest is the one made up of eligible Russian Para-athletes.

Athletes, who must have had at least two anti-doping tests in the past six months, will compete in alpine skiing, biathlon, cross country, snowboard and wheelchair curling.

The Russian team topped the medal table in Sochi in 2014 with 80 medals, including 30 golds, but the 2018 team has a different look.

Among those who have been named on the team are alpine skier Aleksei Bugaev - who won two golds, two silvers and a bronze in the standing category in Sochi and five golds at the 2015 World Championships - and fellow double Sochi gold medallists Aleksandra Frantseva and Valerii Redkozubov, who both compete in the visually impaired category.

It will be a first appearance at a Winter Paralympics for North Korea after the country was given two invitational slots by the IPC for the Para-nordic skiing events.

The two athletes who will take part are Ma You-chul and Kim Jung-hyun, who both compete in the seated events.

Both made their international debuts at January's World Cup in Oberried, Germany, with funding from the Asian Paralympic Committee and the Agitos Foundation, and finished 34th and 35th respectively in the 7.5km event and 26th and 27th in the 15km event.

However, unlike at the Olympics, they will not march with South Korean athletes under a unified flag at the opening ceremony.

North Korea competed for the first time at the 2012 Paralympics with one swimmer taking part and three athletes represented the country at the 2016 Paralympics.

It is not yet clear whether the loud and co-ordinated North Korean support evident during the Olympics will be in place for the Paralympics.