GB won 124 medals, including 41 golds, to finish second in the medal table behind China.

While those tallies are a drop on Rio five years ago, Britain won medals in 18 of the 19 sports they entered, a new team record.

"It's been an incredible Games for ParalympicsGB," Briscoe said.

"We're absolutely delighted with the performance of the team."

Chef de mission Briscoe believes the return of Russian athletes - competing under the flag of their Paralympic Committee after they were banned in 2016 - made replicating Rio's medal totals improbable. 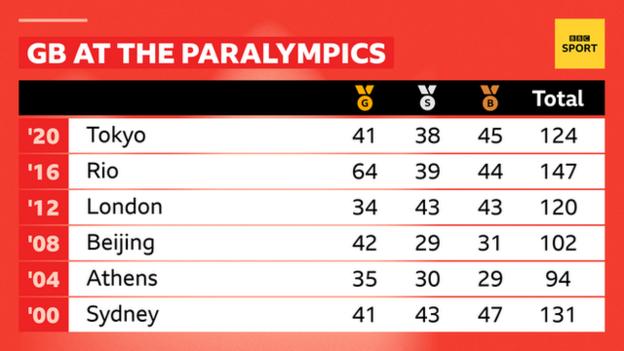 She told BBC Radio 5 Live: "The medal total was always going to be difficult in terms of the return of Russian athletes. But for 18 out of 19 sports to deliver medal success was an absolutely phenomenal effort by the team.

"We've rewritten the history books out here in Tokyo."

The Winter Paralympics begin in Beijing in six months' time with the next edition of the summer Games in Paris only three years away.

"It has been a monumental effort," said Briscoe of the Tokyo campaign. "It has been challenging, complex and incredibly demanding. Not only in the 12 days we've been competing but in the 18 months leading up to the Games."

The 12 days of action were brought to an end in a shimmering closing ceremony that celebrated Japan's mix of cutting-edge technology and distinctive culture as well as commemorating the unique challenges of holding the Games during the coronavirus pandemic.

Boccia gold medallist David Smith carried the Great Britain flag, while the parade into the Olympic Stadium included the Afghanistan flag, which was carried by their two competitors, Zakia Khudadadi and Hossain Rasouli. They had been evacuated from Kabul before making it to Japan in what was described as "a major global operation".

The pair had arrived late in Tokyo and missed the opening ceremony.

After a performance that evoked classic console games and karaoke and a solemn acknowledgement of the healthcare workers behind the scenes, Paris, the next host, took centre stage.

A collection of French Tokyo 2020 medal winners, joined by Olympic counterparts, musicians and circus performers, cheered beneath the Eiffel Tower, with the famous landmark given a prosthetic running blade in place of one of its four legs in a computer-generated image.

Seiko Hashimoto, president of the Tokyo Organising Committee who competed at seven Olympic Games as a track cyclist and speed skater during her sporting career, paid tribute to the athletes.

"The indomitable spirit of all those who have overcome difficulty has illuminated this stage," she said.

"We were overwhelmed by your astonishing performances. The long and arduous paths you have travelled shook us all to the core."

The Games signed off with athletes and performers coming together in a rendition of Louis Armstrong's jazz standard What a Wonderful World.

Paralympic movement 'stronger than ever'

The staging of the Games amid the pandemic has shown the Paralympic movement is "stronger than ever before", according to International Paralympic Committee (IPC) president Andrew Parsons.

The Games, like the Olympics earlier in the summer, took place behind closed doors with Covid-19 case numbers in Japan breaching 25,000 per day for the first time four days before their start.

"I think these Games were just sensational," he said.

"The sport was unbelievable, world records were broken in every possible sport. Performances were fantastic. To think that these athletes have prepared for these Games under the circumstances of the pandemic, facing restrictions, is unbelievable.

"It's proof that the Paralympic movement is stronger than ever before."

Parsons hopes to have all sports shown live in 2024

Financial constraints meant that there was no live television coverage of wheelchair fencing, powerlifting and Para-taekwondo at the Tokyo Games.

Parsons said he hoped to have live coverage of all sports at Paris 2024.

"In Rio there were 13 events covered live and here in Tokyo we are running 19 sports live," he told BBC Radio 5 Live.

"Of course we would like to have the 22 sports being played live on TV but at the end of the day it's a matter of resources and broadcasting rights.

"I was frustrated to not be able to have these sports live but also on the flip side we made great progress from going from 13 in Rio to 19 here in Tokyo."

Parsons added that the IPC will take "a more targeted approach" in adding new sports to the Paralympic programme after seeing the response to karate, baseball, skateboarding, climbing and surfing at the Tokyo Olympics.

The Paris 2024 sports selection mirrors Tokyo, although wheelchair basketball is still waiting for final confirmation that it will be included because of changes to its classification rules that have been demanded by the IPC.

Any significant changes to the Paralympics programme would only take effect from Los Angeles 2028.

"We will be more proactive in selecting sports that we think will be appealing or that the host nation might think will be interesting," Parsons said.

Sarah Storey delivered three of Britain's golds with victory in the individual pursuit, time trial and road race to claim her 15th, 16th and 17th Paralympic titles of a career that has spanned eight Games and two sports.

Storey has now surpassed swimmer Mike Kenny as the most successful British Paralympian of all time.

While the 43-year-old intends to compete again at Paris 2024, in part to give her three-year-old son Charlie the chance to experience the Paralympics in person, other British legends will not be back next time.

Five-time champion swimmer Ellie Simmonds and Libby Clegg, who did the T11 sprint double on the track in Rio, have said that Tokyo marks the end of their Paralympic careers.

However, a new generation of stars emerged, led by swimmer Reece Dunn, who was Britain's most successful athlete at the Games, winning five medals, including three golds.