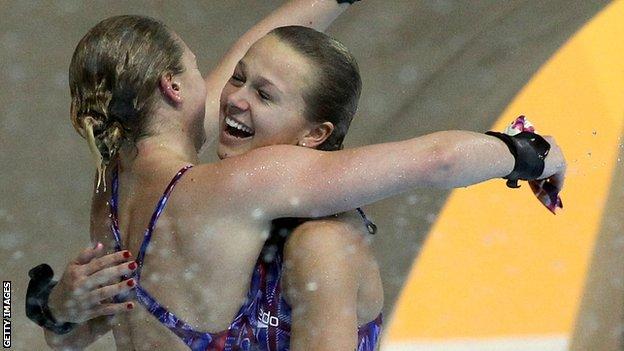 The pair were only eighth in the 10m platform synchronised event heading into the final dive, but produced a stunning effort to make the podium.

"We were shocked - you could see when we saw the scoreboard," said Barrow.

"It took me a while to realise it," she told BBC Sport. "I saw number two come up and wondered if we were third or fourth, then we heard the crowd and it was just great.

"I think we deserved it."

Diving partner Couch added: "I'm quite shocked if I'm honest. On our last dive we were just knew we had to get a good one in so we're just really pleased.

"The crowd help so much, they were so loud and everyone was screaming.

"I said to Sarah when we were up on the board 'let's do this now' and both of us obviously squeezed as hard as we could."

After scoring a personal best total of 467.60 in the morning's semi-finals to qualify in sixth position, the Sheffield-based diver increased the difficulty of his routine in the hope of increasing his total.

After four impressive dives, Laugher found himself in fourth position.

However, he struggled with the forward 4.5 somersault routine, which he was attempting in competition for the first time and fell back four places to finish with 463.70 points.

"I had some such great dives and a great start," said Laugher.

"I took a big risk [with the 4.5 somersault routine], but I thought it's a final so why not? If I hit it, it'll be absolutely massive as it is the hardest dive in the world on the 3m.

"I missed it, but it's OK because I still did well and I'm taking it all in as experience for the Olympic Games," he added.

Day four will see Tom Daley compete for the first time at the Aquatics Centre as he partners 2004 Olympic silver medallist Pete Waterfield in the 10m platform synchronised event.

"Our goals for the World Cup are to go in there and show what we can do," Daley said.

"It's our first competition of the year, so we have to get in there and show everyone that we mean business."