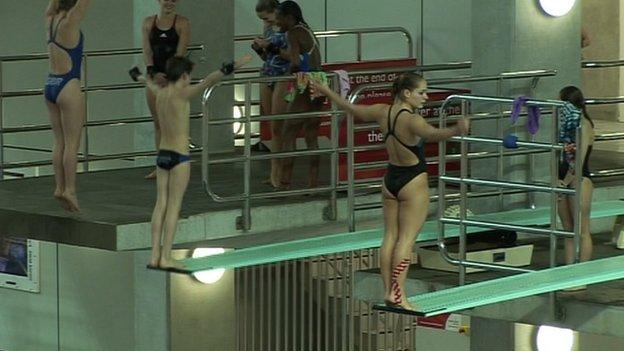 The success of Tom Daley has led to a number of the country's most promising young divers moving to his home pool in Plymouth to further their careers.

Daley's coach, Andy Banks, and is now in high demand from people wanting to emulate his success.

"We're pleased that we're not only producing our own divers, but enticing people to move to what are fantastic facilities here, and also some fine educational institutions that are offering bursaries and scholarships to help that to happen.

"The school kids are coming in during school time. Their programmes are related to the diving programme as well and we're making sure they catch up on work that they miss.

"The aim really is academic success as well as sporting success, all under one umbrella."

The trend comes as Plymouth-born Sarah Barrow returned to her home town to train with Olympic partner Tonia Couch, after leaving the city to train in Leeds.

And in Daley they have the perfect role-model - as well as training for London 2012 he managed to get 'A' grades in his A-Levels exams.

Victoria Vincent is one young diver who has moved from London to take up the chance to train and be educated in Plymouth.

"I really want to go to Rio in 2016 and get a gold medal," said the multiple national age-grade champion who used to train at Crystal Palace.

Her mother has left the family home in Sutton to be with her in Plymouth while her father, Ray, stays in the capital as he continues to work as a tube driver.

"Victoria's a fairly sporty person anyway, an all-round athlete, so the biggest problem we had was finding the sport she wanted to specialise in," Ray said.

It's all about performance, so our aim is to help each of these kids develop to the best of their potential

"Once she made that decision we had to think of what the best options were.

"Crystal Palace is a great pool, but sadly hasn't got these facilities. It's been great for Victoria, but I think her future is here really.

"I could have boarded Victoria here, but I think she'd be happier with Mum. So Mum and Victoria are here and live in a flat and I save all my rest days and come down when I can, generally every two weeks for four days."

Three other young women from London have also made the journey to the South West and Banks feels that Plymouth's Life Centre even beats the capital's Olympic aquatic centre as a training base.

"It's got a family feel here and the divers all love it," he continued.

"One of my goals in life when I first started coaching was to try and find talent and then help it achieve the potential it could be.

"We've got new kids coming through, both home-grown and those that have moved here, so the next four years are going to be just as busy as the last four."