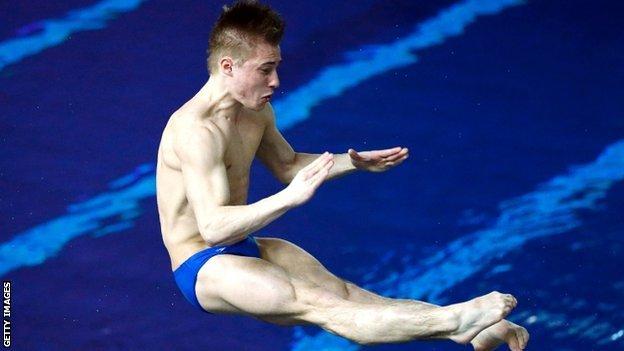 Jack Laugher took another step towards putting his Olympic nightmare behind him with his third successive title at the British Diving Championships in Plymouth.

Laugher won the 3m springboard competition with a score of 448.10, which would have been enough for bronze at the Olympics.

The 18-year-old was ranked seventh in the world ahead of the Games.

However he went out of the Olympics in the first round.

"Out of the three [titles] this is probably the one I'm most proud of," said Laugher. "This is one where I've put in new dives and I've done front four-and-a-half and inward three-and-a-half in the same list for the first time.

"I've only been working on this list for about a month so it's really new but it's definitely got potential. I'm not competing much until the end of the year so hopefully I'll have got it good in time for the worlds, if I'm selected."

By contrast Chris Mears, who enjoyed a dream run to the Olympic final last summer, had a day to forget as he could only claim seventh.

Meanwhile, Tonia Couch claimed her second gold medal in as many days with victory in the women's 10m platform.

The 23-year-old was controversially omitted from the individual platform in London, despite qualifying in second at the Olympic trials, but with title holder Stacie Powell absent and Monique Gladding having retired after the Olympics, Couch followed Friday's platform synchro success alongside Sarah Barrow with a comfortable win on 365.20 points.

There was also a third successive title for Becky Gallantree and Alicia Blagg in the 3m synchro.