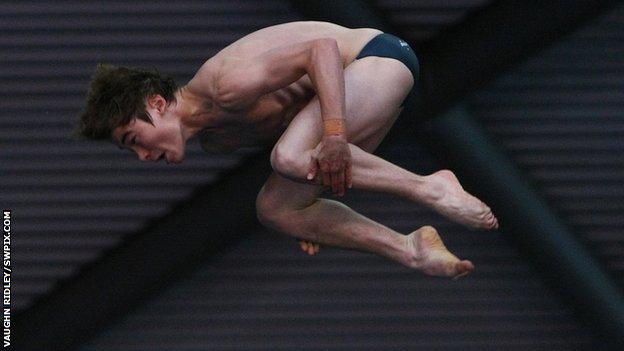 Daniel Goodfellow is aiming to become Tom Daley's synchronised diving partner after finishing as top junior on the 10m board at the British Championships.

The pair narrowly missed out on a medal at London 2012, finishing fourth in the 10m synchronised platform final.

Cambridge-based Goodfellow, who also came third in the men's 3m competition last weekend, is a bronze medallist at the European Junior Championships and has been touted as a natural partner for former world champion Daley.

"I'm concentrating on what Daniel is doing and we'll see what happens in the future.

"You never know. Daniel is only 16 and he is improving every single day. He's developing at a steady rate and people are very happy with his progress.

"Loads of people are very excited about Daniel, I am too. I've been working with Dan for four years now.

"There's always the plan to put most of his dives up on the 10m and travel across the country to continue training hard.

"He's put his name on the map and he's coming through strength to strength."