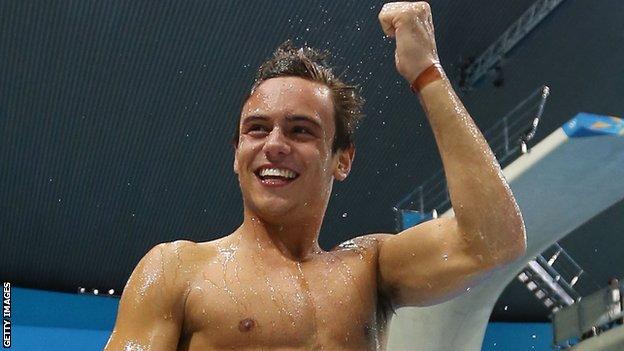 Tom Daley has revealed he is on the look-out for a new synchronised diving partner to replace Peter Waterfield.

Doubts over 31-year-old Waterfield's future have been cast since he lost funding from British Diving in January.

"Peter is going to be too old to compete in the 2016 Games because his body's taken a battering over the years," Daley told BBC Radio Devon.

"It's going to be interesting to see who is going to partner me, and we'll just have to wait and see who that is."

Dan Goodfellow is definitely one of the contenders

Plymouth-born Daley, 18, and Waterfield have been partners since the start of the 2011 season, and narrowly missed out on a medal at the London Olympics, finishing fourth in the 10m synchronised platform final.

However with the news of Waterfield's funding cut, the partnership appears to be coming to an end.

A potential replacement could be 16-year-old Daniel Goodfellow, who finished as the top junior diver on the 10m board at the British Championships.

But despite Goodfellow's coach stating the youngster wants to become the Olympic bronze medallist's partner, Daley says that he is just one of a number of candidates.

"I think Alexei (Evangulov) our performance director has got lots of different ideas for different synchro partners," Daley said.

"He sees lots of potential in some of the younger divers. He's trying to fast-track some of them to get them to the stage where they can partner me in the 2016 Games.

"Dan Goodfellow is definitely one of the contenders."