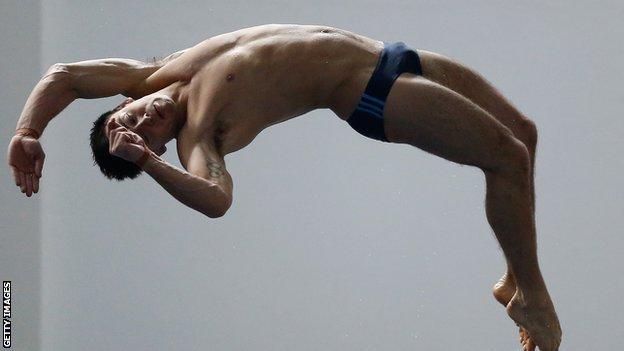 Olympic diving bronze medallist Tom Daley has his motivation back having found things hard after London 2012.

Daley returns to international competition at this weekend's World Series event in Edinburgh as he builds up to the World Championships in Spain.

"It's extremely tough to go all my life working towards the London Olympics and then it was over," he said.

"Once it was gone it was tough to get back in the pool, but my season starts here in terms of the World Champs."

The 18-year-old finished third in London behind American David Boudia and Qiu Bo of China in a dramatic 10m platform final at the Olympic Aquatics Centre but after just two weeks off, he was back in training for the World Youth Championships.

Daley, who has won World, European and Commonwealth titles since making his senior debut in 2007, admits he lost some of his desire after London.

"I didn't really see past it. I don't think anything is ever going to live up to that in my career to be honest," he added.

"It was hard to think 'I've got to work towards Rio now'. It is so far away."

Life has changed for Daley post-2012 and he has moved out of the family home and taken up cookery classes with team-mates Tonia Couch and Sarah Barrow as well as co-presenting the ITV diving-based programme Splash!

"It's been really good. I've been able to enjoy lots of different things," he said.

"The year after the Olympic year out of the whole four-year cycle in blatant terms is the least important. It has been fun just to let my hair down for a bit.

"I spent time with family and friends and we went on a holiday to Spain and had fun.

"But there is the World Championships coming up in July in Barcelona so there is that importance and, for me, training and diving is always the main priority.

"But when all that is done I know the next thing for me to do is win an Olympic gold medal. Overall that is the driving factor."