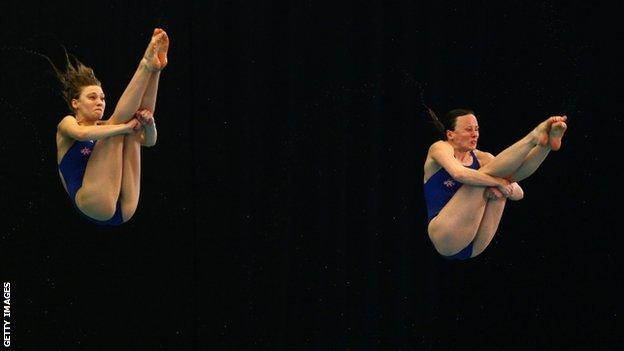 Great Britain claimed two medals on the opening day of the Diving World Series in Edinburgh.

Becky Gallantree and Alicia Blagg, who were a disappointing seventh at the London Olympics, took silver in the women's springboard synchro.

Chris Mears and Nick Robinson-Baker then won bronze in the men's event.

The twin success puts Britain third in the medals table going into a weekend on which Tom Daley and junior world champion Jack Laugher will dive.

"It's been a great day for Great Britain," Mears said. "Hopefully we can get some more medals. We are chuffed to bits with it."

British Diving chief Alexei Evangulov had terminated Blagg and Gallantree's partnership after their Olympic showing but they were reunited when replacement Hannah Starling suffered an early-season injury.

They justified the reprieve with silver in last month's opening leg of the World Series in Beijing and repeated the success in the Scottish capital.

"This is the best we have dived together," said Gallantree. "Obviously we got a medal last month in Beijing so we knew it was possible.

"We know we can do even more. It was seven points short of our previous best. We have changed our list with the extra degree of difficulty at the end - that's working for us."