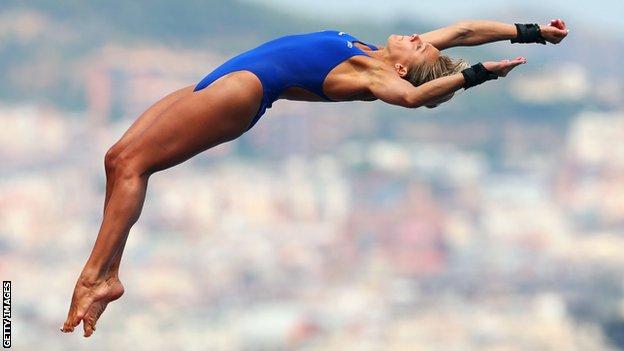 British divers Tonia Couch and Sarah Barrow both showed excellent form as they qualified for the 10m platform final at the World Championships.

Couch finished second after a superb score of 368.15 - her best ever in individual competition - while Barrow ended in sixth place with 316.05.

"I seemed to be able to put everything together at the same time so I'm really pleased with myself," said Couch.

The Plymouth-based pair finished fifth in the synchro diving on Monday.

I've got nothing to lose now

But Couch in particular will now go into Thursday's final in Barcelona full of confidence after finishing just behind China's Chen Ruolin.

Her semi-final second dive score of 83.20 was comfortably the best of the day, and she led the competition until a slight dip on her final attempt.

"It's made me a lot more confident. Going into the preliminaries, I was a little worried because I hadn't done an individual at this level since the Worlds in 2011," added Couch.

"I'm going to go in on Thursday and do the same and enjoy myself because I really enjoyed myself today and it put me in a good position to dive.

"It was really exciting at the end but in a way, I'm glad I didn't finish first because I wouldn't have known what to do with myself! I've got nothing to lose now."

Barrow suffered at the hands of the judges with a mistake on her fourth dive leading to a score of just 33.75, but she recovered well to guarantee her place in the final.

"I was a bit disappointed to drop my fourth dive but to come sixth in the world with a dropped dive proves I can still achieve a good result on Thursday," said Barrow.

"I'm looking forward to it now and I'll go in and have a bit of fun."

Thursday's final will be the first time Britain has had two female finalists in this event at a World Championships.