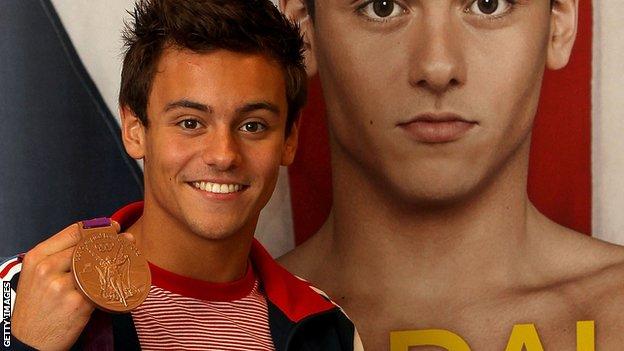 Tom Daley may have finished third at London 2012, but he has a more prominent public profile than many of Britain's Olympic champions.

The 19-year-old diver has been pictured with boy band One Direction and stars of reality TV show The Only Way is Essex; attended celebrity weddings, including that of presenter Dermot O'Leary; and was recently named the "world's sexiest man", beating the likes of David Beckham and Superman actor Henry Cavill to the title.

Daley's clean-cut, boy-band good looks, humble persona and athletic ability make him a marketing man's dream and his net career earnings, estimated at around £2m, are sure to swell further over the coming years.

His status could rise further if he secures his first world title since 2009 at this weekend's event in Barcelona.

"Since the Games, life has been crazy, it is a little bit surreal sometimes," Daley told BBC Sport. "I've been invited to different networking events, parties, weddings and it's really nice to meet people who are in a similar situation but seem really normal as well."

Success and fame can come with a price though, as Daley has discovered.

He has more than 2.4m Twitter followers, putting him third behind footballers Wayne Rooney [6.8m] and Rio Ferdinand [4.5m] in the list of the most-followed British sportsmen.

His tweets have occasionally led to problems. After a disappointing night out in Cardiff, Daley tweeted: "Definitely not going to go to Cardiff for New Year again. People say it's a good night out. I can assure you it isn't," leading to a backlash from the local community.

There was also a slightly bizarre incident involving a micro-pig ornament.

"I tweeted a picture of me with the ornament and then all of the magazines were saying I had bought this micro-pig for like £250," he says, clearly still frustrated.

"I don't have a micro-pig. It's things like that make me laugh a little bit, but you think, how did that happen? You can never let your guard down when you're out in public because there is always someone watching you that will like take a photo of me.

"Then newspapers and magazines can twist it whatever way they want to and you have no say in it so you have to be careful."

The diver has also been the target of unpleasant abuse on Twitter. After finishing fourth in the 10m synchronised platform final at London 2012 alongside Peter Waterfield, an internet "troll" said he had let down his late father Rob, who had passed away a year earlier.

The teenager who had sent the tweet was cautioned. There was another incident that led to Welsh Premier League footballer Daniel Thomas being reprimanded for making a homophobic remark about Daley.

"I think I have had to grow up pretty quickly from a young age," says Daley.

He admits that simply popping to the shops in his home city of Plymouth can lead to a lot of attention, although it is generally friendly and well-intentioned.

"If I go into town on a weekend I get stopped by pretty much every other person and you have to triple the amount of time to go and do what you need to," he says.

"I do the sunglasses, keep my head down and just walk sometimes because it's difficult. But I don't mind when people come up and stop me because they're being supportive.

Splash! has given people a unique way of seeing diving

Daley's celebrity was undoubtedly enhanced by ITV show Splash! which will return for a second series early next year.

His involvement in the show was not without controversy though, after he was criticised by his national performance director, Alexei Evangulov, and British Swimming chief executive David Sparkes.

This resulted in Daley's mum, Debbie, writing an open letter to the Daily Mail defending her son and emphasising what a positive effect he had had on the sport.

Daley himself believes the show has done more than anything to increase interest and participation in diving.

"It was one of those shows you either loved or hated and at first people were a bit sceptical," he admits. "Then the ratings kind of proved that it was a massive success and I think Splash! has given people a unique way of seeing diving.

"They see the Olympics and the serious side of it, but when they see it in a fun, reality-TV kind of way like Splash! it tripled the number of divers at Plymouth diving.

"The numbers have gone through the roof, with people who want to do diving, and there are now waiting lists and that's never been known to happen before."