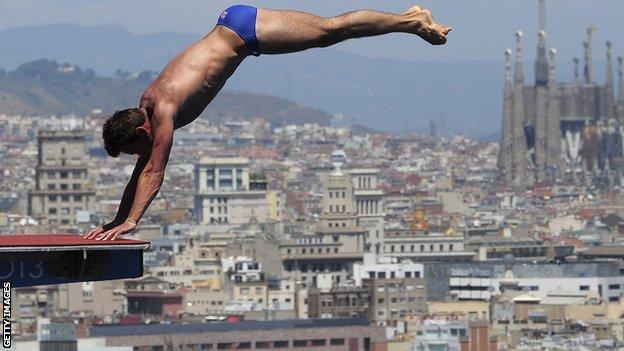 The Olympic bronze medallist, 19, suffered an upper-arm injury in April and experienced a reoccurrence of the problem in training on Thursday.

The 2009 world champion was third with two rounds remaining, but slipped down the rankings and totalled 470.60.

After a slow start, defending champion Bo delivered impressive scores of 99.75 and 99 before bettering that with incredible totals of 108 and 110.

Daley, who tore a triceps muscle earlier this year, found himself in fifth position after the first two rounds but then delivered his dive of the competition to score 99 for his back 3.5 somersault routine.

It drew high-fives from the GB coaching staff, but also raised prospects that Daley could challenge for a medal.

He slipped back to sixth heading into the final round of dives but was one of four divers with a chance of claiming bronze.

However, he scored just 61.05 for his usual favoured dive, the reverse 3.5 somersault routine and slipped out of contention.

"I found out yesterday that I've torn my triceps again so today and yesterday I've been diving with a torn triceps not knowing whether it was going to make it worse," Daley told BBC Sport.

"I've also had a local anaesthetic in there today so I've been diving with a numb arm so it was a bit of a weird sensation but I really wanted to compete and would have even if my arm was falling off."

He added: "It's one of those really frustrating things knowing that it's only 517 points to get a silver so the scores are low, but if you have an injury you can only do your best and I'm a long way off that."

Daley will now take some time away from the sport before returning to training later in the year as he builds towards the start of the World Series in early 2014 and the defence of his Commonwealth titles.

"I can go away from here and try to get my triceps rehabbed properly so it doesn't get any worse. I've torn it three times now so it's about time I had a little bit of luck. It's been one thing after another this year," he added.