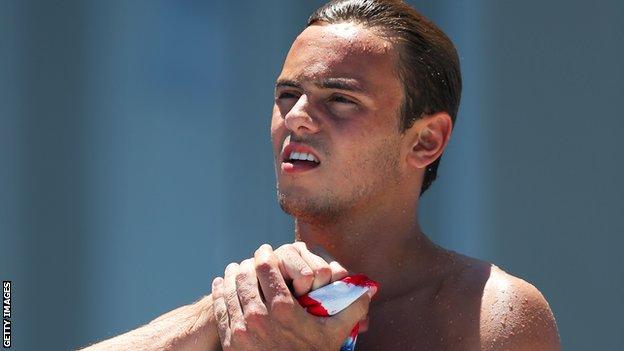 The 19-year-old is the highest-profile athlete at the city's £46.5m Plymouth Life Centre. but could switch to the Olympic Park's Aquatic Centre.

"It's a massive blow if we lose Tom to London," former Great Britain diver Brooke Graddon, a friend of Daley's, told BBC Spotlight.

"But for Tom it's a massive move and he needs to do it for himself."

Daley, who won an Olympic bronze medal at the Aquatic Centre in 2012, has trained in Plymouth alongside Great Britain coach Andy Banks for more than a decade.

"Andy's done so well just to hold on to him and to get that London medal. For him to go now at this age is kind of a normal thing in diving," added Graddon.

"For him to stay here being as good as he has is massive - we thought he'd have gone years ago."

Daley - who has nearly 2.5m Twitter followers and presented the primetime ITV show Splash! - has been one of the sport's biggest names for several years, also winning gold medals in the World Championships, Commonwealth Games and European Championships.

He has continued to train at the Life Centre, helping to attract a large increase in participation and interest in the sport in the south-west.

"The little ones do look up to him and love him being around, as with [fellow GB divers] Tonia Couch and Sarah Barrow - it's a massive thing here in Plymouth," said Graddon.

"But he needs to move on with his his career and think about his career after diving, and for his diving he needs a change and a break from Plymouth."