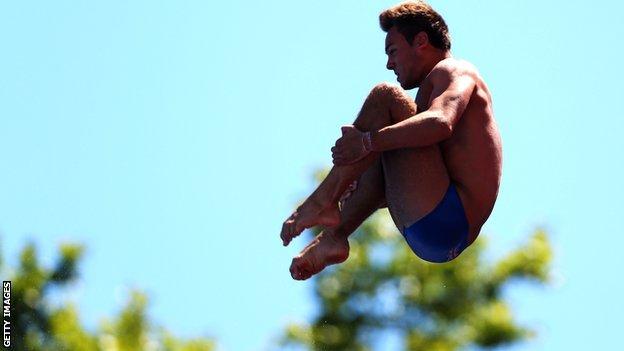 Olympic bronze medallist Tom Daley has announced he will move his training base to the Aquatics Centre in London.

The 19-year-old had worked with GB coach Andy Banks in his home city of Plymouth since he first took up the sport as an eight-year-old.

"Plymouth will always be my home but I've decided that a change will be beneficial to my development," he said.

I know Jane will do a great job

The Aquatics Centre was the venue where Daley won his bronze medal in 2012, and he said he had "great memories" of the pool.

"I have my sights firmly set on Rio 2016, and I'm looking forward to starting the next chapter in my diving career in London," added Daley, who had trained alongside fellow GB divers Tonia Couch and Sarah Barrow at the Plymouth Life Centre.

"I would also like to take this opportunity to thank Andy for all his help over the years.

"He has been pivotal to my achievements and I wouldn't be the diver I am today without his continued dedication and support. I know we will keep in close contact and I know he will always be there for me."

Banks said it had been "a pleasure and a privilege" to coach Daley, who has grown into one of Britain's highest-profile sporting stars.

"I fully understand and support Tom's move to train in London," said Banks. "The facilities there are excellent and I have known Jane for years and know she will do a great job."

Zimbabwe-born Figueiredo was previously the head coach of the diving programme at the University of Houston and officially started her new role on 15 January.

"The opportunity to coach somebody as world class and elite as Tom Daley is something that I am really looking forward to," she said.

She helped Russians Yulia Pakhalina and Vera Ilyina to three Olympic medals in two Olympics, including gold at Sydney 2000 in the 3m synchro.