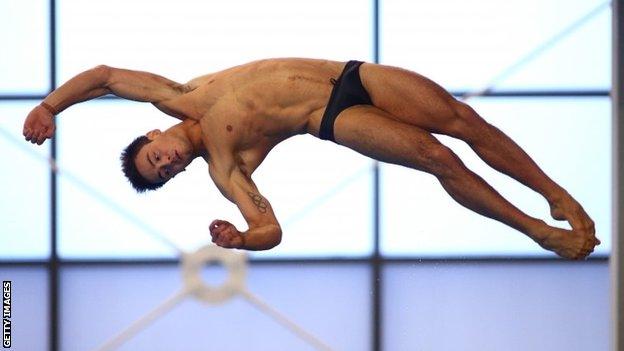 Tom Daley admits he may need to make changes to his diving routine to win gold at the Commonwealth Games in Glasgow.

If it doesn't start to feel more comfortable, maybe I'll think about trying a different dive

However, he struggled with the backwards 2.5 somersault with 2.5 twists routine in the piked position.

"The twister is my demon dive at the moment," he said.

Daley, who won bronze at London 2012, began his Olympic final campaign with the routine, but was permitted a re-dive after flash photography distracted him.

After last summer's injury-hit World Championship bid in Barcelona, Daley said he would seek psychological help to overcome the "panic" he experienced when performing it.

"I'm breaking down my dives and working towards the bigger picture, which is the Commonwealth Games," said Daley, who won two titles at Delhi 2010 and has not introduced new dives to his routine since 2011.

"If it doesn't start to feel more comfortable, maybe I'll think about trying a different dive."

Earlier in the event Daley, who has been without a regular diving partner since Peter Waterfield retired last year, finished second alongside Daniel Goodfellow, 17, in the 3m synchronised springboard competition.

The next major event for the British divers will be the World Series opener in Beijing at the beginning of March.

They will then compete at the London Aquatics Centre for the first time since the 2012 Olympics when the tour heads to the UK from 25-27 April.