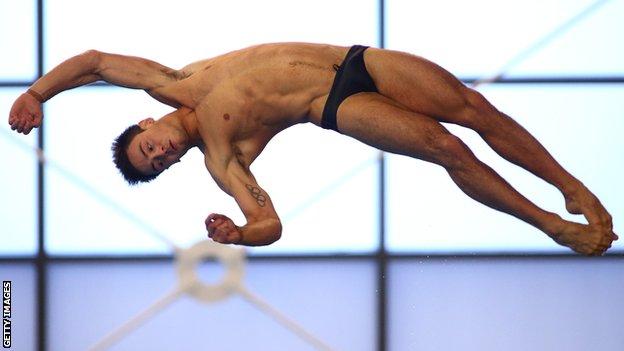 Tom Daley is to compete at the London Aquatics Centre for the first time since winning an Olympic bronze medal at London 2012.

Daley, 19, is part of the Great Britain team for the Fina Diving World Series, which takes place from 25-27 April.

The former world champion, who has moved to London from Plymouth, competes in the 10m platform.

"This is the first time I have competed at an international at my home pool and I am really excited," Daley said.

"I have been in London now for almost two months and I love it. The pool holds such good memories for me and is always impressive when you walk in.

"It's going to be good to compete alongside the world's best and I know that it will be a tight 10m platform final with the likes of David [Boudia] in the mix.

"He showed he is world class at London 2012 and it's going to be good to go up against him again and see where we're both at, at this point in the season."

Tonia Couch, returning from injury, and Sarah Barrow will be in action in both the women's 10m platform events.

Chris Mears and Jack Laugher make up the British team's new 3m synchro pairing and Laugher will also compete in the 3m individual.

World Series medallists Rebecca Gallantree and Alicia Blagg are lining up in the women's 3m synchro, while new pair of Matty Lee and Daniel Goodfellow will compete in the men's 10m synchro.