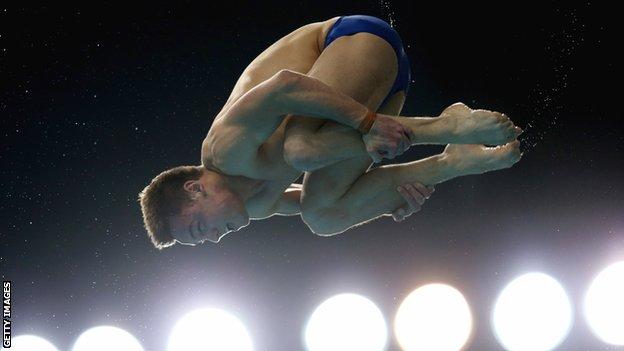 Tom Daley will compete at the London Aquatics Centre for the first time since claiming Olympic bronze when he takes part in the World Series event.

It is the first major competition the venue has hosted since under-going a post-Games makeover.

The venue looks amazing and we can't wait to get diving

Diver Daley relocated from Plymouth to the centre earlier this year and is part of a nine-strong GB squad.

"It's the first time the whole team has been back here and it's going to be pretty special," he told BBC Sport.

The venue, which hosted all of the aquatic disciplines at the London Games apart from water polo, cost more than £250m to build and had its capacity reduced from 18,000 to around 2,500 before it was re-opened to the public in February.

Although long-term Chinese rival Qui Bo is missing the event, Daley will face tough opposition in the form of US Olympic gold medallist David Boudia and world synchro champion Sascha Klein of Germany.

Daley is currently without a partner for the 10m synchronised platform competition and likely to skip the event at the Commonwealth Games, so teenage duo Daniel Goodfellow and Matty Lee lead the British challenge in the event.

"It's our first time in the pool as we weren't in the team for the Olympics, so we're really excited," Goodfellow told BBC Sport.

Lee, who has won two World Series bronze medals with his team-mate so far this season, added: "Our partnership has clicked really quickly and we have a great relationship, which I think is behind our success so far."

Two-time Olympian Tonia Couch dislocated her knee earlier this year but returned for the season-opening World series event in Beijing, where she won bronze.

She will compete in both the individual 10m platform event and the synchronised competition with Sarah Barrow.

They teamed up after last year's World Championships, where Mears finished eighth with Nick Robinson-Baker, but he slipped in their opening training session and only recently returned to training after suffering problems with both ankles.

"I was in a wheelchair for a few months, which wasn't ideal, but Jack and I practically live together and have a really close relationship which will hopefully make us a force to be reckoned with," he said.

Rebecca Gallantree, who narrowly missed out on an individual medal in the Dubai leg of the series last month, will be partnered by Hannah Starling in the 3m springboard synchro final as her regular partner, Alicia Blagg, is injured.