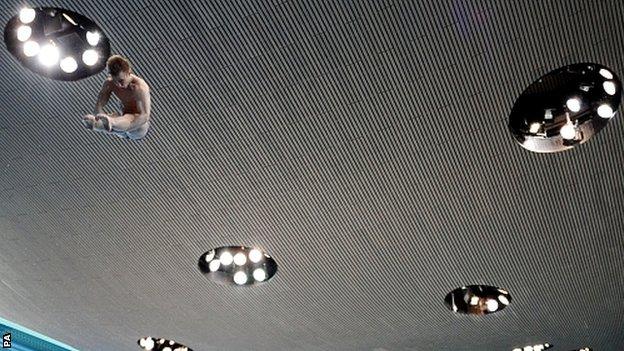 Olympian Jack Laugher narrowly missed out on adding to Great Britain's medal haul at the World Diving Series with fourth place in the 3m springboard.

"I've got to look at the positives and to get that score, which no other British diver has done before, is great," Laugher told BBC Sport.

I'm learning all the time

That was alongside new team-mate Chris Mears, but hopes were high when Laugher then led the standings after two rounds of the individual event.

However, a poor third dive (inward 3.5 somersault) saw him drop to fifth and, although the teenager briefly climbed back into the top three, Russia's Olympic medallists Ilya Zakharov (536.15) and Evgeny Kuznetsov (523.20) produced superb final routines to deny him.

"I know if the third routine had gone better I would have been up there on the podium, but I'm learning all the time," added Laugher.

Laugher will now head to Russia, Canada and Mexico for the final three rounds of the World Series before June's British Championships, which act as the final qualification event for the English Commonwealth Games team.

"With the score I've got and what Chris and I achieved yesterday, it does give us a lot of confidence heading into the summer," he said.

In the women's individual 3m springboard final, Olympic and world champion He Zi (360.15) of China took gold ahead of team-mate Wang Han (359), while Canadian Pamela Ware (335.25) was third.

The final day of the World Diving Series on Sunday will see London 2012 bronze medallist Tom Daley renew his rivalry with US Olympic champion David Boudia in the 10m platform final.

Couch and Barrow will also contest the women's event.