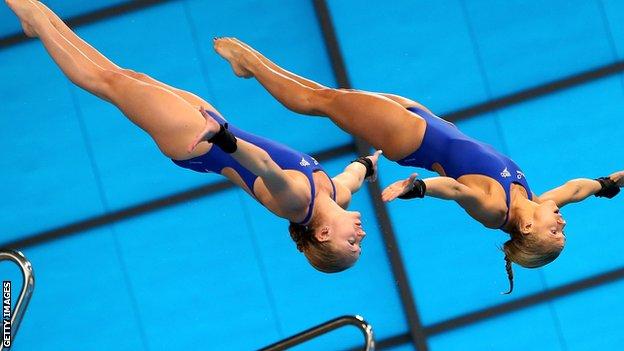 Sarah Barrow and Tonia Couch won silver in the 10m platform synchro at the latest world series event in Canada.

The Plymouth pair, who landed gold in the European Championships in Eindhoven two years ago, were in top spot after the first two of their five dives.

But they were eventually forced to settle for second behind home pair Meaghan Benfeito and Roseline Filion.

Another great day in Canada

Later, Jack Laugher, 19, and Chris Mears, 21, took bronze in the 3m synchro with a steady series of dives.

Barrow and Couch, both 25, led for the first two of five rounds before slipping to second and then fourth, and then climbing back to second on 311.10 points.

Benfeito and Filion won in style with 330.75 points, while Australians Emily Boyd and Lara Tarvit were third, narrowly behind GB on 308.58 points.

GB coach Andy Banks tweeted: "Chuffed for the girls - and a silver medal to add to the collection! And a great job from Jack and Chris with a bronze."

Laugher said on Twitter: "Another great day in Canada. Bronze with my best bud Chris Mears."