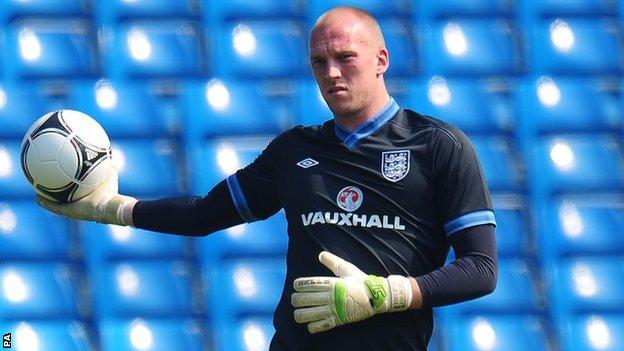 England goalkeeper John Ruddy has been ruled out of Euro 2012 after breaking his finger in training.

The Norwich player, 25, was making his first appearance in the national squad after being named in the 23 for Poland and Ukraine by new manager Roy Hodgson.

Birmingham City's 19-year-old shot-stopper Jack Butland has been called into the squad as Ruddy's replacement.

He was previously on the standby list and will join up with the squad next week ahead of the final warm-up game with Belgium on 2 June.

A statement on the FA website revealed that Ruddy will travel with the squad to Norway on Friday and watch the friendly in Oslo on Saturday, but return to his club upon arrival back in England.

Ruddy is due to get married on the same day that England play their second warm-up game against Belgium at Wembley.

And he has revealed on Twitter: "To everyone who has asked…as if it wasn't unlucky enough, it IS my ring finger and also my first ever broken bone!

"Thank you for the messages, gutted but determined to come back better next season, can't wait for the wedding now! #everycloud. Taken lots of positives from the 2 days training, and the biggest positive is that it happened with England before a major tournament!"

His injury caps a disappointing end to what has been an impressive first season in the Premier League, in which he helped Norwich to a 12th-place finish.

He started his career with Cambridge and moved to Everton aged 18, but spent most of his five years at Goodison on loan before joining the Canaries in July 2010.

Who is Jack Butland?

His replacement, Butland, has yet to make a senior appearance for Birmingham but made 24 appearances for League Two Cheltenham during a loan spell this season, in which he kept 11 clean sheets.

"Since he came to us nothing seems to fluster him. He's a freak of nature," Book told BBC Gloucestershire.

"He's 19 and he's ticking all the right boxes. He's calm and collected and knows what he can do - in fact, there isn't a lot he can't do. He's going to be a very good goalkeeper.

"He's got all the right tools to be a top-class goalkeeper and I think Birmingham recognised that when he was 15.

"He's physically right, but whether he needs a bit more experience between the sticks, playing in big games, remains to be seen."

England also have injury concerns over defender Glen Johnson and striker Danny Welbeck ahead of the match in Oslo.

Liverpool full-back Johnson, 27, limped out of Thursday's training session in Manchester with an infected toe, while Manchester United's Welbeck, 21, trained on his own but left the session early.