Though some key rivals were absent, the result illustrates Britain's increasing prominence in the sport. GB won their first European team title in August.

"These are three of what seem to be the top horses in the world," said Carl Hester, who led Britain to European glory in Rotterdam and picked up two third-places finishes at Olympia this week on board Uthopia. 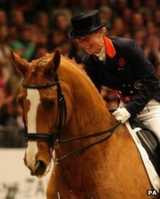 Bechtolsheimer rode Mistral Hojris, better known as Alf, to freestyle victory ahead of Dujardin and Valegro, while roles were reversed in the grand prix. Richard Davison and Hiscox Artemis came fourth on both occasions.

A British team has never before posted such strong dressage results, with Dujardin and Hester enjoying a remarkable 2011. The 26-year-old Bechtolsheimer remains second in the world rankings despite, by her own admission, failing to deliver her best in the past year.

"The last two competitions [before Olympia] for me, as an individual, weren't my best performances," said Bechtolsheimer following Wednesday's victory.

"I wanted to finish 2011 showing that Alf and I are by no means old news. It means everything to have won this competition."

Bechtolsheimer and Dujardin, 25, form a youthful core for the British team. Dujardin has spent almost five years working for and learning from Hester at his yard - she calls her GB team-mate "grandad" - and she hailed 2011 as her breakthrough year.

"I'm still learning and getting to grips with it all, but for a nine-year-old horse to go in there and do that, you have to pinch yourself," she said.

"I've been to the European Championships, won gold, come to Olympia which was one of my dreams this year, and I won yesterday. I can't ask for much more."

Hester added: "In the past, we've had an incredible horse or two come along but, without back-up, that doesn't make a great team. For the first time ever, we have these three combinations [of horse and rider] with a couple more in the background.

"The reality is we have three good horses, getting great scores, with no weaknesses."

Some top riders, such as the Netherlands' Adelinde Cornelissen and Germany's Matthias Rath - who rides Totilas, the most expensive Olympic horse in history, believed to have been purchased last winter for a sum in excess of £10m - did not compete this week.

Olympia is part of a series of World Cup qualifiers and riders only take part in a certain number of them, so a full-strength field is rarely seen at this level.

This is the only World Cup qualifier most of the British team will compete in prior to the London Olympics, where both team and individual dressage medals will be available.

The World Cup season is not due to end until late spring, uncomfortably close to the Games, and the competition is therefore not seen as a priority for Britain.

Hester, Dujardin and Bechtolsheimer will skip the remaining stages to focus on the health of their horses. While the team's achievements leave their potential in little doubt, injury to a top horse is always a danger and could yet wreck Olympic hopes.